Alvin and the Chipmunks Wiki
Register
Don't have an account?
Sign In
Advertisement
in: Episodes, ALVINNN!!! and The Chipmunks: Season 4

Life of the Party

You Troll is an episode of the ALVINNN!!! and The Chipmunks series.

The Chipmunks try to keep Dave from getting on the internet after a performance he posts gets negative comments.[2]

Dave's car sputters into the driveway and The Chipmunks rush to greet him at the door. Kevin informs them at school there's a video online of Dave's solo singing performance and the chipmunks quickly check it out. Most of the comments are negative, despite a large number of views, and after Eleanor criticisms the trolls, she asks Jeanette for input, receiving an annoyed response before walking away. Ignoring Jeanette's reaction, Alvin decides to focus on making sure Dave doesn't see any of the remarks posted against him. Dave desires to see the video on his laptop, which Simon claims is out for a "check-up" but is really being dropped off at the Miller House by Theodore. The youngest 'munk explains to the elder there's trolls in the computer, which only frightens the technical novice. Since Dave's determined to see the posted performance, all six friends work together to keep all computers and phones away from Dave. Meanwhile, Miss Miller beats, burns, disposes, and buries Dave's computer due to the fear the trolls will come after her. Dave receives a phone call asking him to perform solo for charity, without The Chipmunks, to his and Alvin's surprise. Miss Miller hears Kevin and Cheesy outside and urges them inside to tell her more about trolls in computers; when she informs them she buried a couple in the backyard, they quickly make excuses to leave. Brittany gets ready for a "casual nice" afternoon lunch, and once Jeanette's told she needs to change for it, she decides not to go, leaving with a rant about more important qualities like values and kindness rather than looks. Back at the Seville House, Officer Dangus arrives with Miss Miller to return his laptop. Dave asks the boys for an explanation, and they show him the video. Despite claiming he can handle negative comments, Dave sulks in his bed intending to cancel the concert, despite the boys' attempt to cheer him up. Jeanette rushes over to talk to Dave when she finds out, unable to take anymore. Dave believes she's there to talk about his trolls, but she confesses her own experiences with trolls instead. Together the two learn that trolls are sad and lonely people that attack everyone. In the end Dave asks Jeanette to perform a song with him at the concert. 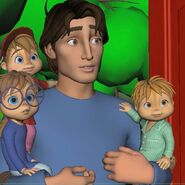