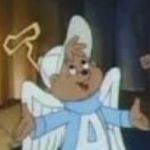 Hey there, I'm Optimist!
I'm a 17-year-old fellow who joined this Wikia in October 2016. I usually edited on song pages and other minor places, and later got nominated as a council member in July 2017. The Chipmunks have really made my life entertaining. I"m known as Optimistic Alvin on the Chipmunks Discord server and I can be found on Munkapedia's affiliated forum, and on Twitter as well.

How did I become a fan?
I actually first discovered them when I watched the CGI Film Series (that was the first Chipmunks content I ever watched), then I started watching the CGI Cartoon Series, and that's when I became a fan. I found out The Chipmunks had an 80s Series cartoon (I never watched that before), and I've found some recordings of those old 80s episodes which don't air now. I haven't watched any episode of The Alvin Show yet.

I haven't really watched all of the episodes of the 80s Series, only roughly 70% of them...

Retrieved from "https://alvin.fandom.com/wiki/User:Optimistic_Alvin?oldid=106317"
Community content is available under CC-BY-SA unless otherwise noted.