Theodore's Dog is an episode of The Alvin Show series.

Theodore finds a dog (Alexander) at an animal shelter and drags him home. Theodore tries to convince Dave to allow a dog to live with them, but he says no since they travel too much. Desperately wanting a dog, Theodore hides Alexander in the basement; when he escapes, Dave believes there are burglars and he calls the police. Dave becomes angry when he finds Theodore's been hiding the dog, but his brothers convince Dave to take him on their trip. 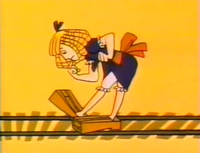 The Chipmunks are getting tired of performing and just wish to stay home, but Dave convinces them otherwise. When Ms. Goody informs Dave in their dressing room that Suzy can't perform, Alvin states Dave can take her place since "the show must go on." During the show, Alvin drops Dave into the Forty Niner's Mine twice. The second time Simon and Theodore, dressed as rangers, attempt to rescue him, but their ladder is too short. When the play concludes, Ms. Goody thanks him for playing Clementine. 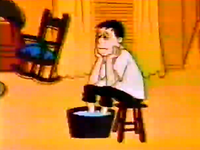 The Chipmunks are watching one of Clyde and Leonardo's invention segment while Dave is in his room trying to teach himself how to dance. After he falls down multiple times, the boys enter his room first to see what's wrong and then to help teach Dave some moves. Dave has some luck initially, but the moves prove too much for him. While Dave sits with his sore feet in water, the boys go to the ball to dance in his place.

Retrieved from "https://alvin.fandom.com/wiki/Theodore%27s_Dog?oldid=87460"
Community content is available under CC-BY-SA unless otherwise noted.