List of Episodes
The Whistler is an episode of The Alvin Show series.

The Chipmunks have just got back home from a long performance tour. While Dave, Simon, and Theodore are cleaning up the house, Alvin tends to his garden only to get into a match with the neighbor's dog who keeps burying its bone in his garden. Even after talking to the neighbor, the dog keeps harassing Alvin and his garden. Tried of dealing with the dog, Alvin rushes to get a whistle after Simon reads him part of Dog's Life. It's not long before he realizes the whistle's side effect. 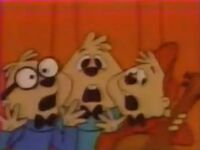 The Chipmunks are preparing to go on stage for the Teen-Time TV Show. Alvin believes all the girls will demand the twist but Dave thinks otherwise. Dave's proven wrong when one of the girls yells, "Come on Alvin, do the twist!" The boys immediately change songs and begin playing the twist. The girls go crazy and by the end of the song they storm the stage. Dave saves him to yell at him to cut it out. Alvin feels the twist coming and starts singing again. 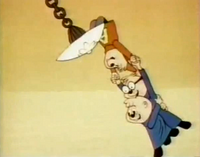 While Dave is in the attic going through some old songbooks, Alvin discovers a large player piano. After Dave refuses to move it downstairs at Alvin's request, Alvin decides to paint the player rolls so pictures are shown to the music. Halfway through the song, Simon and Theodore become tired of pumping the peddles and not seeing the pictures so Dave takes over. When the boys swing and jump off the chandler, Dave rushes to catch them covered in the player roll. 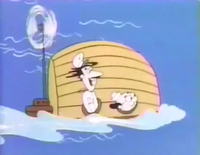 Professor Crashcup is giving a speech when Leonardo rushes him a note from Mrs. R.A. Festwhistle, an old woman pleading to be rescued from a deserted isle. His first idea is the side-wheeler boat, two boat paddles powered similar to a bicycle. With the inevitable failure, Cycle tries to mimic ducks but gets stuck in the sand. Following suit of the note they received, they set off in a giant bottle only to be washed back to shore. Clyde's final idea is a boat with a door to the basement that is built upside down. They reach the island but the woman is rescued by a large ship instead and they are left on the island.