The Chipmunks are getting ready for school when Alvin notices a rock show advertised in the newspaper. Though the boys won first place in the talent show that day, Alvin oversells their fame to classmates so they set out to see the producer of the rock show in order to keep his word. The guard turns them away, but they come back disguised as a cake for Mr. Winters' birthday in order to sneak by him. The guard realizes his mistake and rushes after them. The band of chipmunks crashes the Cooking with Kay show by bursting out of the cake, leading more guards to chase them. They find themselves hiding in Mr. Winters' office, where Alvin claims thousands of fans have requested to be on his show. Harrison asks them to prove it and The Chipmunks go home to write thousands of letters before returning. He's impressed and approves their request until he discovers the letters are fakes, though they are already performing to an excited audience. Meanwhile, Dave believes the boys are sick and calls a doctor. He learns of the deception when the doctor shows him the water bottles and they hear the brothers' singing on TV. Back home, Dave gives Alvin a surprise of his own - a new lawn mower!

The book was illustrated by George Wildman. 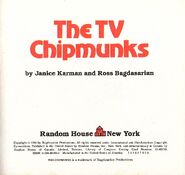 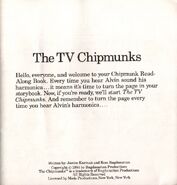 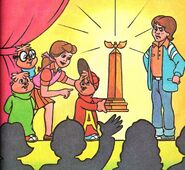 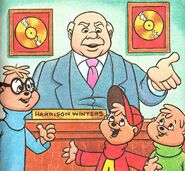 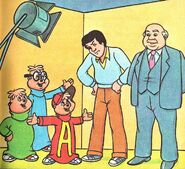 Retrieved from "https://alvin.fandom.com/wiki/The_TV_Chipmunks?oldid=95725"
Community content is available under CC-BY-SA unless otherwise noted.