May the Best Chipmunk Win

Chipmunk Harry rummages through a garbage bin when he discovers an old poster of a performance by The Chipmunks, sparking an idea in which he can get rich off them. The following day, the three brothers notice Santa, really Harry, looking for lawns to mow. Santa Harry cons them into believing the bank took his sleigh and reindeer, meaning Christmas will be ruined, and helping him build Santa's Place, an amusement park, to raise money. The Chipmunks not only build the park but also run it on opening day. Seeing the profitability of one set of chipmunks, Harry devises a plan for the band of brothers to make many robotic versions of themselves to help run the park. Alvin later overhears Santa's real motive and sets out to stop him. The Chipmunks, pretending to be the robots, ruin the investors meeting by sabotaging every task they were meant to preform. The angry investors chase "Uncle" Harry off and the boys take home some of the robots to help with chores, to the disbelief of Dave.

The book was illustrated by Corny Cole, Francesca Freeman, and Dennis Durrell. 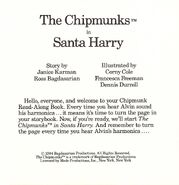 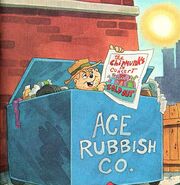 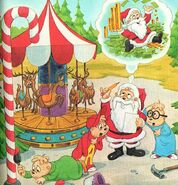 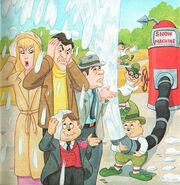 Retrieved from "https://alvin.fandom.com/wiki/The_Chipmunks_in_Santa_Harry?oldid=95463"
Community content is available under CC-BY-SA unless otherwise noted.