Dave and The Chipmunks are having a picnic in the country, desperate to get away from fans, only to be bombarded by a tour bus full of them. Alvin demands a real vacation just before setting out to chase the thief that took his sandwich. He learns the thief is a wild chipmunk and in a quick moment decides to switch clothes with him. Seeing as the wild chipmunk ate his lunch, Alvin explores the woods for food until he's trapped by a rope from the ankle. Grizzly Sam, the man who set the trap, confronts him and thinks of making money off Alvin considering his self-proclaimed fame. Meanwhile, the wild chipmunk is settling into the Seville House as Dave takes Grizzly Sam's call. Thinking it's a prank, Dave hangs up and takes the boys to dinner. Simon and Theodore notice "Alvin's" strange behavior and vow to find the real Alvin. The brothers question the wild chipmunk and they learn Alvin really is captured. The trio travel to Grizzly Sam's cabin and develop a ploy to trap the trapper. With Alvin freed, the two swapped chipmunks resume their true identities and The Chipmunks rush to their concert on a tricycle. At the concert, Dave's worrying as the audience demands for the boys until a police car drops them off and they start preforming. 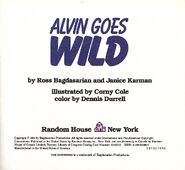 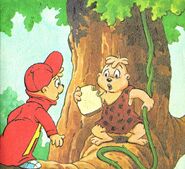 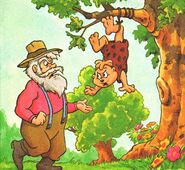 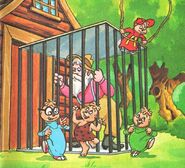