The Chipmunks and the Little Lost Dog

While trying to raise money for homeless animals, The Chipmunks befriend a lost dog.

The Chipmunks notice a sign on the way home from school encouraging support for the Animal Society. After Alvin calls promising $20, he breaks open their piggy bank to learn it's empty thanks to Theodore's large purchase of Girl Cadet cookies. Alvin decides they'll dress up as Girl Cadets in order to sell the cookies. They have little luck until a man in the last house decides to buy them all. Unfortunately all the cookies are reduced to crumbs as the result of the snacking of Theodore and the little dog that began following them. The brothers connect with the dog and agree to take him home despite Dave's allergies. Thinking of a new way to make the donation, Alvin mischievously thinks of washing Dave's car, after they dirty it with mud first. Once it's clean again, Dave gives Alvin a dollar as payment. Meanwhile, in the garage, Theodore informs Alvin and Simon he's trained the stray giving Alvin his next idea – a backyard circus. Theodore collects admissions before Simon introduces the act, performed by Alvin and the dog. The little dog refuses to do tricks at Alvin's command, upsetting the audience and leaving him covered in vegetables. The youngest brother baths the dog afterwards during which they learn the dog is named Pretty from its collar. When the boys arrive at Mr. Veevers home, they discover a long line of people with dogs. Pretty suddenly pulls the leash, rushing into the house. Inside, the owner reunites with his pet and agrees to donate $100 in each of The Chipmunks' names to the Animal Society as an award.

The book was illustrated by A. O. Williams. 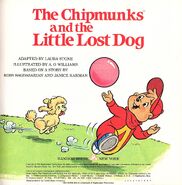 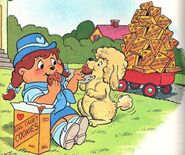 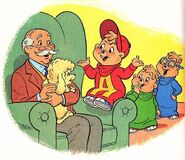