Two chipmunks, Simon and Theodore, are introduced while Alvin is missing, busy looking for something in the snowy woods. He travels from tree to tree until he trips on a root and his brothers go back to their burrow with him. Once there, Mr. Owl begins the boys' practice of "The Chipmunk Song." Simon wishes for a plane before Theodore wishes for a hula hoop, but Alvin's gone missing again, to Mr. Owl's frustration. Meanwhile, Alvin's out in the forest again searching for something and mistakenly slips on a frozen pond. Mr. Owl finds him and take him back to the burrow. During the song, various animals listen outside until Alvin goes missing once more. Tired of Alvin's behavior, Mr. Owl informs his parents, who express their worry that Santa won't learn what Alvin wants for Christmas as the boy won't answer. On Christmas Eve, Santa stops by leaving the boys' wishes: a plane, a hula hoop, and, Alvin's wish, a Christmas tree.

The book was illustrated by Richard Scarry. 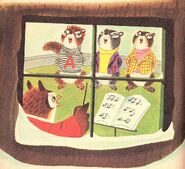 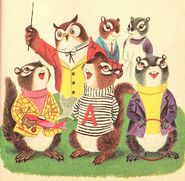 Retrieved from "https://alvin.fandom.com/wiki/The_Chipmunks%27_Merry_Christmas?oldid=107959"
Community content is available under CC-BY-SA unless otherwise noted.