Alvin and the Chipmunks: The Ocean Blues

David Seville's working on writing a new hit song under the pressure of his boss and landlord when someone knocks on the door of his leaking house. Outside he finds a basket with three chipmunks and a note left by a mother unable to feed them. Dave takes them in and while out shopping, the boys explore their new home. He returns to find the house a mess and the brothers asleep. The following day his landlord, Mr. Roach, confronts Dave about complaints and promises retaliation when he learns of his "pet rodents." Mr. Roach captures the boys and takes them to the pound, at which they plan an escape to return to Dave. With The Chipmunks' help, Dave records them singing a new song and they leave for Megabux Record Company. Mr. Mogul calls their song a bomb and the boys sneak into a radio station next door to play the track. Mr. Mongul hears the song on the radio and, with Alvin bargaining, gives Dave a contract and new car. The next day, Dave and the brothers move out of the old and damaged house to find a new dream home.

The book was illustrated by Renzo Barto. 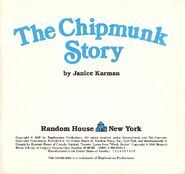 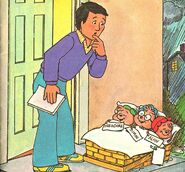 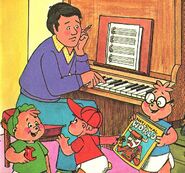 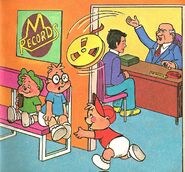 Retrieved from "https://alvin.fandom.com/wiki/The_Chipmunk_Story_(Book)?oldid=95447"
Community content is available under CC-BY-SA unless otherwise noted.