"Talk to the Animals" is a song originally performed in the film Doctor Dolittle that is covered by The Chipmunks, featuring Dave Seville, first released as a single in 1968. The song is also included in the albums The Chipmunks See Doctor Dolittle, The Chipmunks 20 All Time Golden Greats, and Greatest Hits: Still Squeaky After All These Years (2007). 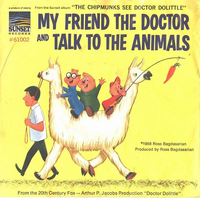 Dave:
Alright, boys, so far so good. Now, what did Dr. Dolittle wanna
do with the animals more than anything else, Alvin?

Alvin:
He wanted to learn to talk to 'em.

Dave:
And who promised to teach him how to talk to the animals, Simon?

Dave:
Okay now, Theodore. Do you think you remember the song the doctor sang?

Theodore:
Ah, sure Dave, if you help me.

Dave:
Okay Theodore, I'll start it out for ya.

If I could talk to the animals, just imagine it
Chatting with the chimp in chimpanzee
Imagine talking to a tiger, chatting with a cheetah
What a neat achievement it would be

The Chipmunks:
If we could talk to the animals, learn their languages
Maybe take an animal degree
I'd study elephants and eagle, buffalo and beagle
Alligator, guinea pig and flea

Dave:
If people asked me, "Can you speak rhinoceros?"

The Chipmunks & Dave:
Grunt and squeak, and squawk with the animals

Dave:
And they could talk to me
If I consulted with quadrupeds
Think what fun we'd have asking over crocodiles for tea
Or maybe lunch with two or three lions, walruses and sea lions
What a lovely place the world would be

The Chipmunks:
If I spoke slang to orangutans
The advantages any fool on Earth can plainly see
Discussing eastern art and dramas with intellectual llamas
That's a big step forward you'll agree

Alvin:
I'd learn to speak in antelope and turtle
My Pekinese would be extremely good

Dave:
If I were asked to sing in hippopotamus

Alvin:
I'd say "Whynotamous?" and would

The Chipmunks & Dave:
Grunts and squeaks, and squawks with the animals

Dave:
And they could talk to him
I'd study every living creature's language

The Chipmunks:
So you could speak to all of them on site

Dave:
If friends said, "Can he talk in crab or pelican?"

The Chipmunks:
And if you just stop and think a bit
There's no doubt of it we would win a place in history

The Chipmunks & Dave:
Grunt and squeak, and squawk with the animals
And they could squeak and squawk, and speak and talk

Retrieved from "https://alvin.fandom.com/wiki/Talk_to_the_Animals?oldid=104608"
Community content is available under CC-BY-SA unless otherwise noted.