List of Episodes
Squares is an episode of The Alvin Show series.

Mrs. Frumpington, the head of a group called The Ladies of the Square, visits the Seville House. She explains that the goal of the group is to ban certain miserable music on television and radio. After she expresses the group's desire to outlaw Chipmunk music with the support of 2,500 signatures, The Chipmunks devise a plan to stop her. To do so, Alvin stops by her house and the boys cause her to become joyous to their music until she's trucked away to Happydale: The Home For Tilted People.

Soon after Dave addresses the audience while The Chipmunks are onstage, Alvin makes a joke of his introduction. When Dave fails to make a good joke in response, Alvin counters him with another. Dave then asks the boys to sing something southern; they agree excitedly. Near the end of the song, Alvin asks another joke and the performance ends with the audience clapping.

Dave and the boys take a gondola lift up to a ski lodge in Switzerland. Following Alvin playing with a clock, they rent a couple pairs of skis. Before heading down the mountain, the boys learn the mountain does indeed echo and decide to sing as they ski. The Chipmunks have a flawless trip down, though Dave can't seem to stay upright or avoid obstacles. The brothers end up waking the town talking to the mountain. 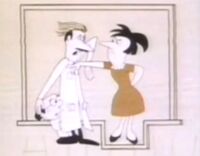 Due to his loneliness, Clyde sets out to invent the "perfect" wife. Soon after, his wife beings to yell at him about the state of the house and forces him to get rid of Leonardo. Saddened by Leonardo's new solitude, Clyde invents the dog (who doesn't like Leonardo). Wanting to make his wife happy, he invents gifts, but since he forgot to name his wife he must first invent a name: Pictorial Crashcup. His good intentions back-fire when Pictorial's drill sergeant personality forces him and Leonardo (let in because of the snow by Clyde) to do chores. Unable to solve the mystery of the wife, they carry her outside and bar the door.