Sir Alvin is an episode of The Alvin Show series.

Daisy Belle comes over to stay at the Seville House while her mother is shopping. When Simon and Theodore take off into another room, Alvin is forced to spend time with her. In order to amuse the girl, he has to use his imagination to create a medieval fantasy. Daisy plays the part of a prisoner held by an evil fire-breathing dragon and Alvin is her brave knight trying to rescue her, but the dragon unfortunately is more cowardly than fierce. Before Alvin can save her, her mother arrives to take Daisy home. 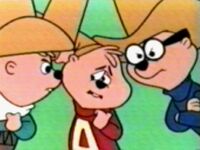 Alvin tricks Dave into leaving the garage so they can go in and play with his tools, paints, and everything else they're not supposed to. While they sing Theodore makes seven horses, one in which he rides on. Meanwhile Alvin keeps distracting Dave with the doorbell until Dave catches him. When he finds them in the garage, he gives them three seconds to clean their mess.

Retrieved from "https://alvin.fandom.com/wiki/Sir_Alvin?oldid=104110"
Community content is available under CC-BY-SA unless otherwise noted.