Simone is a set of side effects that reflect on Simon throughout Alvin and the Chipmunks: Chipwrecked. Simon's love for Jeanette is used to help explain the similarities between Simone and Simon. External links are used to provide video evidence. 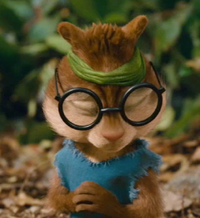 Brittany's comment to Simon when they go to rescue Jeanette is an interesting thought. "But Simone is you. He's in there somewhere. You just have to find him." He does not cross the log for fear overpowers his concern for Jeanette at that time, but he is indeed disappointed and perhaps even ashamed in himself as he walks away, leaving her to face an unknown fate. (More detail about why he does this later.)

Names have importance. Look again at the two names: Simon and Simone. Note their similarity. No coincidence exists in the use of Simone or with the names being nearly identical. But, in actuality, they are the same. Simone is the French name to the English name Simon. Therefore, when Simone woke up after the spider bite, he essentially (though indirectly) proclaims he is "Simon." 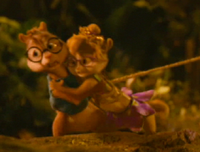 Simon's act of bravery for Jeanette as she is pulled back by Zoe mirrors Simone's. Simone always displayed confidence and never exhibited fear at any point while with Jeanette. After physically seeing her in danger, Simon too becomes independent of his fright by bearing an air of courage around himself. He refuses to let Jeanette down when she needs him most. Simon displays fierce determination in saving her just as Simone did earlier. By overcoming fear, Simon briefly transforms into Simone while exposing his true love for her through his act of heroism.

Simone's comment to Jeanette at the waterfall after giving her the bracelet is critical to consider. "Even the most precious gem cannot compare to your beauty." is almost exactly the same as Simon's comment to Jeanette on the raft (one word difference): "Even the most perfect gem cannot compare to your beauty." If Simone and Simon are not the same, the odds of Simon saying this near exact statement are very slim. He also could not have remembered his compliment to her before as Simone since when the side effects wore off, he shows no recollection of dating Jeanette or of giving her a bracelet.

The side effects of the neurotoxin include "changes in personality, loss of inhibition, dry mouth."

The Overlooked Side Effect

Below is a fundamental element that might have been overlooked. This aspect must be considered in order to understand Simone, and in turn, Simon.

Recall that one of the side effects of the spider bite is the loss of inhibition. An inhibition is a force that prevents something from happening and usually comes from within yourself. Shy people are often said to suffer from inhibitions. Some inhibitions are good, such as the one that prevents us from choking the life out of people we dislike. (Simon's controlled temper toward Alvin when he causes trouble, though Simon can lose his temper and become violent as seen in Alvin and the Chipmunks: The Squeakquel.) Other inhibitions, like the ones that prevent someone from ever enjoying or expressing themselves, are not so great (these are usually fear - both from relationships and phobias such as Simon's fear of heights).

After Simon is bitten by the spider, he experiences two changes that dramatically affect his outward expression. The first is his personality (a fun-loving French dude named Simone), but the second is his loss of inhibition. As a result of both changes, he is seen as a fun-loving French dude who is unafraid of making open romantic gestures and is able to suppress common fears. His personality change cannot fully explain Simone's affection for Jeanette though since Simon had already shown multiple hints of affection prior to the spider bite.

These new thoughts strongly suggest (though cannot prove) that Simone's love for Jeanette is really Simon's love for Jeanette which, in turn, implies that the two represent one. Simon's inhibitions prevented him from expressing his love to Jeanette the way Simone did. We see on the raft that Simon tries to prove to Jeanette, through his complement, that he loves her as Simone did and that he is not really that different from Simone (successively breaking through inhibition).

Simone is used to give an inside view of Simon's true thoughts and feelings towards Jeanette. Simone is, in fact, deep within Simon, a part of him. We see "Simone" slowly emerging through Simon's bravery in saving Jeanette and his more steadied compliment on the raft (unlike the very nervous comments he makes to Jeanette after the shuffle board joke and while starting the fire).

Hopefully this article provides a better understanding of Simone's role in Simon and the Simonette relationship. As Simon begins to suppress his inhibition, he will be able to express his love toward Jeanette with confidence and their relationship should grow stronger.

NOTE: This analysis is based strictly on factual information, not opinions. The conclusions provided are created solely off of scenes from Alvin and the Chipmunks: Chipwrecked. 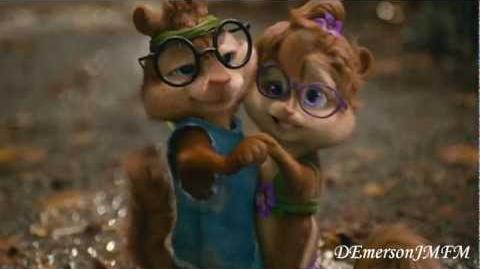