"I'm often confused with this Simon fellow. Perhaps we look alike."
Simone (pronounced see-mone) is a supporting protagonist in Alvin and the Chipmunks: Chipwrecked.

In the film, Simone is Simon's alter-ego. Simon is bitten by a spider that carries a neuro-toxin. Thus, Simon has trouble sleeping that night. When he awakens, he takes the seaweed bandage off of his arm, ties it around his head, rips his sleeves off of his hoodie, and runs into the jungle. Theodore wakes up and follows him. Theodore asks him what he's doing and he tells him to call him Simone. They set off on their adventure. Alvin later finds Simone and Theodore bungee jumping. Alvin says Theodore is too young to bungee jump, but Zoe responds by telling Alvin to be less uptight. He finds The Chipettes not long before Simone drops in on a vine. He gives each of them a kiss on the hand, but quickly falls in love with Jeanette. They all see it is going to rain, but he says he "cannot imagine a better roof over their heads than the stars in the sky." Simone dances with Jeanette in the rain. Later Simone goes swimming and finds a hidden cave behind the waterfall. When he comes back, he has a bracelet that he gives to Jeanette. He is very romantic around Jeanette throughout his time in the movie. The next day, he is hit on the head by a golf ball Zoe threw at him, which results in him changing back into Simon. 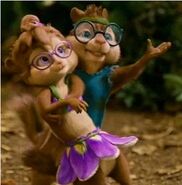 Add a photo to this gallery
Retrieved from "https://alvin.fandom.com/wiki/Simone?oldid=111760"
Community content is available under CC-BY-SA unless otherwise noted.