Sam Valiant: Real Estate is an episode of The Alvin Show series.

The boys are tired of being stuck in the house and they convince Dave to take them out by showing him a brochure with beautiful pictures for Valhalla Estates. Dave calls Sam Valiant, now a real estate agent, who tries to sell David Seville and the boys a rundown piece of property. They are later saved by a tribe of politically incorrect Indians who actually own the land.

Dave and The Chipmunks ride on a handcar until they stop to drive some railroad spikes into the ground. As they work, Simon and Alvin smash Dave's foot with sledgehammers with Theodore coming close. Later while singing on the handcar, the boys leave Dave behind. Dave pursues but they all quickly turn around when a train comes speeding towards them. The scene ends unexpectedly with the director calling cut and the cleanup of the set. 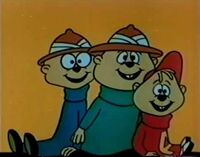 While visiting Arabia, Alvin keeps begging Dave to drive. When Dave isn't looking, Alvin drives, leaving them stranded in the desert. The Chipmunks sing about how they need a camel. Eventually a camel comes to rescue them. 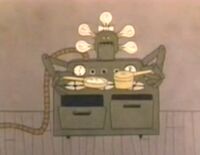 Clyde begins by informing the audience that he is not like other inventors; he cares about worldly problems. To solve the world's food shortage, Clyde invents the egg. In opening the egg (on Leonardo's head), he discovers that food is raw so he invents the stove (a match, later modified into a cauldron). Seeing the cauldron a failure, he invents the pressure stove cooker (which turns out to be a steam train). Determined to prefect his invention, he creates the fully automatic stove.