Sam Valiant, Private Nose is an episode of The Alvin Show series.

While Theodore tries to find George, Dave expresses his excitement about a new recording he recently finished; after it goes missing, he calls a shady detective named Private Nose to investigate. Sam begins searching for the tape, quickly blaming Alvin and even Dave for stealing it. As he searches he demands that Dave and the boys find clues for his nose. It turns out that Theodore's pet parakeet took the tape, among other things, to make a nest in a hat. In the end, Sam takes Dave's recording and leaves the house wrecked. 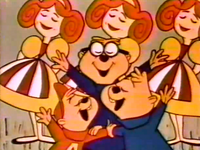 While at Octoberfest in an amusement park (Vergnügungspark in German), The Chipmunks crash into a food stand. As Dave cleans them up, they decide to sing the song in German. When they finish the verse in German, they join a conga line as the orchestra plays. After everyone but Alvin gets a dance partner, Alvin leads one of the conga lines to a bridge outside of town and leaves them. Back with his brothers and the girls, they finish their song. 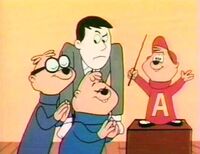 Dave arrives at the recording studio to find that Alvin has hired a 50 piece orchestra to play a song with them. Alvin and the Chipmunks end up singing with the orchestra while Dave attempts to argue with Alvin over the sound of the trumpets. Dave is later seen trying to calculate the cost of such a large band, but in the end gives up and begins throwing money from his wallet up in the air. 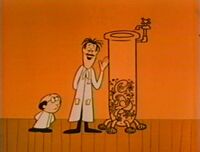 In front of a live audience, Clyde reveals his latest invention: soap. He states the purpose of soap is for eating. The bubbles produced on stage leads him to think of another invention in his lab: the bathtub. After multiple failed attempts to create the perfect tub by Clyde, Leonardo succeeds in creating the correct design. In need of plumbing, Clyde invents it; heedlessly inventing the plumber as well. Soon after the plumber leaves, Clyde starts his bath but unfortunately finds he forgotten to invent the drain, so he must quickly invent swimming.

Retrieved from "https://alvin.fandom.com/wiki/Sam_Valiant,_Private_Nose?oldid=97274"
Community content is available under CC-BY-SA unless otherwise noted.