Rockin' Through the Decades

Rockin' Through the Decades

Cartoon All-Stars to the Rescue

The live-action and animated documentary kicks off with Alvin singing the decades remix of "Witch Doctor" sporting various looks of the rockers Little Richard, Elvis Presley, Jimi Hendrix, Bob Dylan, Michael Jackson, and Bruce Springsteen in each associated segment of the remix.

Will Smith attempts to hula hoop while singing part of "The Chipmunk Song (Christmas Don't Be Late)" before welcoming the viewers to The Chipmunks' Hall of Fame. Smith begins to cover some of the history of the group, though it becomes clear that he is reading from a staged cue card, written by Alvin, overselling the lead chipmunk.

"The Chipmunk Song (Christmas Don't Be Late)" is performed with a mixture of historical clips of their performance. These include The Ed Sullivan Show (1958), The Alvin Show episode Theodore's Dog (1961), and A Chipmunk Christmas special (1981).

Smith is seen standing next a jukebox, now with glasses on, listening to "Alvin's Harmonica." He goes on to state that "The Chipmunks' unique style of music" was the inspiration for many of rock 'n' roll singers, based on the information Alvin gave him.

"Tutti Frutti" is performed in a diner in which Alvin is seen dancing on floating piano keys and different objects are moving around him. Immediately after Alvin performs "Heartbreak Hotel".

Smith states that after long tours and recording sessions took a toll on Alvin auditions for the lead began popping up. Ben Vereen is the first candidate, performing a rap version of "The Chipmunk Song (Christmas Don't Be Late)." Richard Moll is the second, singing a low monotone. Kenny Loggins is the third, performing with his guitar but forgets some words to the song.

Interrupted by Alvin during his meditation, Smith explains how The Chipmunks combined harmony and style of other groups in their songs. The Chipmunks briefly perform "Surfin' Safari" on the beach and "She Loves You" and "(I Can't Get No) Satisfaction" on two separate stages.

Back at the auditions, Raven-Symone, as a little girl, is next to perform with a laugh in her voice. Shelley Duvall is second though performs in a shy, daydreaming-like state.

Part of the musical segment, The Alvin Twist, from The Alvin Show episode The Whistler is played. 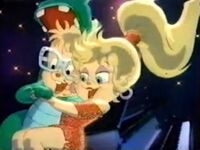 Smith jumps to the 70's with disco. In this time, Alvin performs "Crocodile Rock" with Brittany (sometimes confused with Charlene the Chipette).

The auditions finally wrap up with Markie Post, who attempts a high voice by moving her finger up and down her throat rapidly, and Little Richard, who showcases a very different sound than that of the previous singers.

Gone with the 70's and in with the 80's; all about style. Not only was the beat important, but the visual seen through the music video would follow. Alvin is shown in two Michael Jackson music videos; "Smooth Criminal" and "Beat It."

The 90's were about rap, a decade Smith's familiar with so he decides to rap the decades intro before The Chipmunks perform a rap version of the Christmas-themed "Sleigh Ride" in an alley.

An old Jell-o commercial from 1961 is played.

Will Smith wraps up and "Rock Around The Clock" is performed during the closing credits.