Ostrich is an episode of The Alvin Show series.

While Dave and the Chipmunks are walking down the street they stumble upon a car dealer kicking an ostrich, who is trying to hatch a egg-shaped car, out to the street. After Dave refuses to do anything to help her, Alvin and the dealer trick Dave into "autographing" a contract, resulting in him taking ownership of the car along with the ostrich. Once Dave's frustration hits the breaking point, he grounds the boys from watching television until they get rid of the ostrich. The episode ends with the car "hatching" seven chicks. 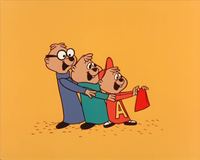 After Dave and The Chipmunks go to Mexico, they discover the land is full of romance and has magnificent buildings and monuments. The boys run through the shops as Dave fanatically looks for them. After Dave succeeds in keeping Alvin with the group, they all go to a bull ring to see a bull fight. Instead of watching, Alvin insists on fighting the bull. Once the bull is released, Simon and Theodore are rescued by Dave when they become frightened. The boys end up riding the bull. 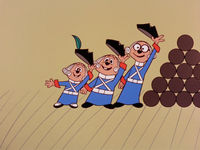 After Alvin arrives to a live stage performance in his very long limo, The Chipmunks prepare the props on the stage unaware that the curtain has already been lifted. When they become aware of Dave waiting, they quickly change (Alvin initially changes into a Santa costume). As they sing Alvin decides to replace "macaroni" with "spaghetti" to the frustration of Dave conducting. As they finish, Alvin kicks a pile of cannonballs that roll into Dave.

Clyde wants everyone to be happy, so he invents a laark which brings him a child he names as a baby. He attempts to first communicate. With mixed success, he then fails in teaching the child obedience. Faced with a tantrum, Clyde states to ignore the child. Afterwards, he invents the high-chair and the proper diet for baby (spinach). Following baby's feeding, he invents the "taughty-tub" (Leonardo suggests "bath-n-net"). While on his way to put the baby in the tub, Clyde slips on some soap and the segment ends with the laark bringing dozens of babies.