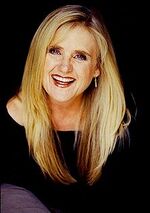 Nancy Cartwright (October 25, 1957) is an American actor, voice actor, and comedian best known for her long-running role as Bart Simpson (and additonal voices) on the animated television series The Simpsons.

Cartwright provides the voice for the Arabian Prince in the animated film The Chipmunk Adventure as well as additional voices in The Chipmunks series.

Retrieved from "https://alvin.fandom.com/wiki/Nancy_Cartwright?oldid=86854"
Community content is available under CC-BY-SA unless otherwise noted.