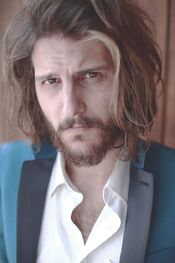 He is credited in multiple episodes of the ALVINNN!!! and The Chipmunks television series as a writer and/or for additional character voices. He is also an Animatic Editor for the series, and he wrote the lyrics for "Nothing Is Going to Stop Me" and "Know Your Energy."

Back in 2007 & 2008, Michael created his own short videos; two of which were Finding a Date and Are Freshmen Getting Smaller? (the latter featured his mother).[1]

As well as his own short videos, he also wrote the 2008 short drama The Apple and the Tree and wrote/directed/produced the 2010 short drama The Extraordinary Fight of Atticus Walker and the Monster in His Mind.

He has a Vimeo for other previous works.

He's credited as Michael Karman in many of his filmography roles.

Retrieved from "https://alvin.fandom.com/wiki/Michael_Bagdasarian?oldid=101450"
Community content is available under CC-BY-SA unless otherwise noted.