Alvin and the Chipmunks in Concert!

Simon and Theodore are busy making campaign posters while Alvin practices his acceptance speech, given he's positive he'll win the school presidency. Later at school, The Chipmunks greet The Chipettes, three new students, and begin getting them settled. Alvin encourages Brittany to think big, in order to adjust to the move, just as she notices a poster for school elections. Puzzled by Brittany's behavior, her sisters learn of Brittany's desire to run for president though Jeanette's startled by the news. Alvin learns of his new running mate so he parades to school on a donkey with his brothers in a small carriage in order to be eye catching, but Brittany goes bigger by riding an elephant for votes. When voting comes around, Alvin and Brittany learn the deciding vote is Jeanette and both do their best to bribe her for it. Jeanette ultimately votes for Alvin considering Brittany wanted to win just to be popular. Brittany's upset until she learns Alvin gathered a group of kids for both his combined victory party and The Chipettes' welcoming party.

The book was illustrated by Corny Cole, Jean Paynter, and Dennis Durrell. 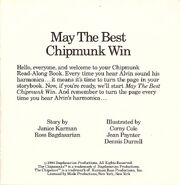 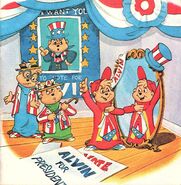 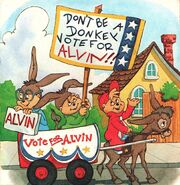 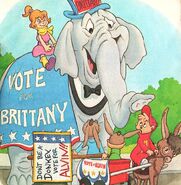 Retrieved from "https://alvin.fandom.com/wiki/May_the_Best_Chipmunk_Win_(Book)?oldid=95457"
Community content is available under CC-BY-SA unless otherwise noted.