Lovesick Dave is an episode of The Alvin Show series.

The Chipmunks are concerned by Dave's unusually behavior and attempt to follow him. Once they stop in front of the Justice of the Peace, they believe Dave's getting married. Back home they overhear Dave on the phone and believe the woman soon to visit is his fiance. The boys spy on their conversation and become convinced Dave will get rid of them. When they confront Dave they find out she is really a representative for Sam Sweetheart's Swimming Pools Construction Company who is helping Seville pick out a swimming pool. 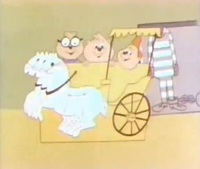 Dave is trying to film The Chipmunks at the County Fair using his movie camera and still camera. The boys want their picture taken but won't stay still long enough to allow Dave to get a good shot. They run off to have a professional take their pictures with props. Once Dave learns they are gone, he goes over to them disapprovingly only to become part of their board prop show. When they are good and done, Dave scolds Alvin over the bill (510 photos).

Dave and the boys are at the fair. Everywhere they go this girl, Daisy Belle, walks in front of them in line with Dave (or the girl) telling them "ladies first." They find some bumper cars that they call "mice cars" and decide to ride. After Theodore claims he can drive blindfolded, the boys begin singing. While singing and riding around Alvin is knocked out of his car into a tuba. The boys get tired of the girl so they push her off the ring with a train. Dave is beaten with an umbrella as a result.

Retrieved from "https://alvin.fandom.com/wiki/Lovesick_Dave?oldid=97283"
Community content is available under CC-BY-SA unless otherwise noted.