Little League is an episode of The Alvin Show series.

Alvin tries to play baseball with his team and care for a bratty baby, Billy Brown, at the same time. While Alvin is playing, Billy keeps bugging Alvin to let him play ball, but Alvin won't let him since he is too young. When his team is losing (with the bases loaded), Alvin has the infant play against the rival team's lead player Roger. The little guy, given the nickname "slugger", hits a home run and wins for Alvin's team. 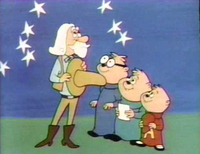 Alvin complements Buffalo Bill for being a "crackshot" and all the metals he's received as a result. When told he has everything, Bill states he's only missing love. He hasn't seen his past girlfriend, Buffalo Gal, in the last 30 years. The Chipmunks learn the only way to bring her back is through song. They go singing at a local TV station and show her picture to the cameras. Buffalo Gal comes back to Buffalo Bill, but he runs away when he realizes she's changed.

While the boys are at the fair they hear a familiar song they decide they want to sing. As they sing three girls drop their hankies and give the boys smiles. (Theodore's is actually an elderly woman who walks again but a white cat comes to join him instead.) Alvin and Simon stand with their girls while Theodore gives his cat friend a tour.