Little Alvin and the Mini-Munks

Alvin and the Chipmunks Meet the Wolfman

Alvin and the Chipmunks Meet the Wolfman

The film opens with Lalu, a friend of Dave Seville's, putting up a banner saying, "Welcome Chipmunks" on the porch of her magic cottage. One of her friends, Gilda (a talking cockatoo), believes that having children around is a bad idea. PC (a talking frog who believes that he is one kiss away from being Prince Charming) says that his mother used to say, "Nothing warms up a home like children's laughter."

Dave, who has to go out of town, arrives with The Chipmunks and The Chipettes whom Lalu is happy to have stay with her and her friends. Sam and Lou, two gophers, report to the viewers at home about the feelings the characters are experiencing. Alvin doesn't like that Dave left, and Lalu explains that she felt the same way when she was young. To help cheer him up, they play as Peter Pan and Captain Hook for a while.

Back inside, Lalu tells Gilda, Alvin, and Brittany a story about a sea serpent attacking a ship, when Simon comes in all wet. Simon explains that the toilet exploded, caused by Theodore. Lalu sees that the toilet is filled with a hair brush, a tube of tooth paste, a toy horse, shoes, squeak toys, etc. Gilda tells PC that he was supposed to be watching Theodore. Theodore lies and said it was Gilda ("Sometimes I Lie"). Lalu explains that she was mad about the toilet exploding, but remembers that we all make mistakes sometimes, and tells Theodore of a time she made a mistake. After hearing this, Theodore tells the truth, and Lalu congratulates him.

As Lalu is readying Eleanor for nap time, Brittany comes in saying that Jeanette stole and ate her lipstick. As PC sings "Rock-a-bye Chipmunk" to Eleanor, Alvin and Simon try to steal Theodore's teddy bear when he's napping with a fishing line, but Lalu catches them. Alvin explains that he and Simon didn't have any toys to play with, until Lalu opens a shelf full of stuffed animals. Lalu explains to Jeanette that eating lipstick could be a problem - for one, it wasn't hers; and two, lipstick isn't good for your tummy. Jeanette decides to get Brittany another lipstick, but doesn't have any money. Lalu suggests that Jeanette work for her, and she could earn enough money to do so, and Jeanette agrees.

As Jeanette leaves to get ready, Alvin comes in (dressed as "Super Alvin"), hiding from Simon (dressed as a magician) who demands his cape back. They get into a fight, until Lalu intervenes, and suggests that they figure out a way to take turns with the cape.

Suddenly, Jeanette comes in, dressed in yellow boots, an apron, gloves, a smog mask, ear covers and a feather duster, saying that she was ready for work ("I'm So Sorry"). She cleans everyone's shoes, makes Lalu's bed, dusts off the furniture, scrubs the kitchen floor, helps with the groceries, and helps Lalu with baking muffins (Jeanette confuses flour with a flower). Jeanette eventually makes enough money to buy Brittany a new lipstick.

Meanwhile, Simon turns on a fan to help "Super Alvin" fly in the air, but he ultimately falls. Afterwards, Alvin and Simon with his magic, try to bring a dead plant back to live. That night at dinner, they get a call from Dave. The children explain what they did that day, and soon after a story, everyone falls asleep in Lalu's bed.

Next day, Alvin and Simon take some tin foil, saying that it will change the face of science forever. As Theodore follows his brothers, Brittany comes in saying that Jeanette stole and dirtied her oven. Jeanette claims she "borrowed" it. She explains that every time she asks for something, Brittany always says no. As Jeanette leaves to clean up the mess, a coin falls from Brittany's pocket. She explains that Tyler, a boy from school, gave it to her, but Gilda comes in and says Tyler's mom called, saying that Tyler lost his favorite coin. Then Lalu explains to Brittany that we sometimes take things that aren't ours because we really, really want them. She also states that it's okay to be sad, but it's not okay to take things that aren't ours. Brittany realizes this and decides to give Tyler back his coin.

Meanwhile, as Lalu and Brittany go to Tyler's to return his coin, Alvin and Simon have used the tin foil to build a spaceship, pretending to be aliens. Theodore wants in on the fun, but his brothers say no, hurting Theodore's feelings ("Why Can't We Play?"). Feeling sad and mad at the same time, Theodore feels the need to hit Alvin. Lalu shows Theodore something he can hit; a balloon toy. Suddenly, Alvin comes and invites Theodore to play.

As they prepare for a tea party, Brittany explains that she feels much better about everything. Then Jeanette comes in after cleaning Brittany's oven, after which Jeanette asks to join their tea party. Meanwhile, Gilda tries to teach Eleanor, the infant, how to be a "proper lady." As Lalu, Brittany and Jeanette enjoy their tea party, Simon, dressed in tin foil, surprises everyone and chases off Brittany and Jeanette. Then Alvin, with Theodore and PC on his shoulders dressed in tin foil as well, surprise Lalu, who takes Eleanor with her as she runs away from the "monster." Sam and Lou, also dressed in tin foil, also surprise Gilda, who faints.

That night, Lalu prepares Alvin for bed, after having some fun with him. Next day, Alvin, Brittany, Jeanette and Simon wake Lalu up to tell her that she's in their band, but Lalu has to decline and take care of Eleanor ("Baby Baby Baby"). After many attempts, Lalu decides to call the doctor. The reason for her crying is that she had to burp and now needs her diaper changed. Seeing how much time Lalu is spending with Eleanor, Alvin becomes jealous ("Dumped For Someone New").

Lalu talks to Alvin, and shows that even though she had to help the baby, she still had plenty of love to go around, even for Alvin. They decide to have a special time together whenever Eleanor has her nap, and Alvin can help with Eleanor. Suddenly, Dave arrives, having finished his song, and The Chipmunks and The Chipettes offer to help practice ("Friends").

Mini-Munks when they first arrive

Ross and Janice with the puppets

Alvin and Brittany with Lalu 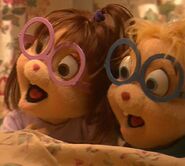 Start a Discussion Discussions about Little Alvin and the Mini-Munks