Alvin and the Chipmunks Wiki
Register
Don't have an account?
Sign In
Advertisement
in: Lists, VHSs, DVDs 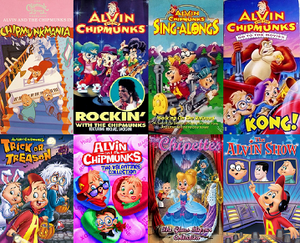 Following the success of the Lorimar Home Video release of the previously successful movie The Chipmunk Adventure on VHS, select episodes of the show from 1983-1990, as well as several specials from the 80's and 90's, were released on VHS. From 1992 to 1996 Buena Vista Home Video distributed all VHS releases.

There were also VHS releases in the U.K. (not included in the list below) that included episodes that have yet to be released in the U.S. on VHS or DVD. They consist of The Phantom, The Wall, Queen of the High School Ballroom, Alvin's Not So Super Hero, Home Sweet Home, All Worked Up, and Phantom Of The Rock Opera.

In 2003, Bagdasarian Productions struck a deal with Paramount Home Video to distribute their latest direct-to-video release, Little Alvin and the Mini-Munks, on DVD. As a result, Paramount continued to distribute select episodes of the show from 1983-1990, as well as several specials, on DVD until 2010 with the exception of the films Alvin and the Chipmunks Meet Frankenstein, Alvin and the Chipmunks Meet The Wolfman (rights owned by Universal Studios Home Entertainment), and the new CGI/live-action films (rights owned by 20th Century Fox Home Entertainment). In 2011, Bagdasarian Productions took over distributing releases once again.