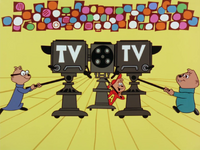 The Alvin Show is the first television series to feature Alvin and the Chipmunks, originally running for a single season in prime time on CBS on Wednesdays, 7:30-8pm Eastern. The show was created in a Three Short format while the other chipmunk series use a Two Short format, nevertheless, both covered the same amount of time.

In the beginning, the show was animated by Ruby-Spears Enterprises, and was seen on NBC Saturday mornings in the 10:30 AM time slot, for all but season 3 (where it was seen at 11:00 AM).

Season 6 actually consists of two groups of episodes. 13 episodes were produced by DiC Enterprises for NBC Saturday mornings; while 11 were produced by Murakami-Wolf-Swenson (MWS) specifically for the syndication package which premiered in fall 1988, in order to bring the episode count up to the standardized 13-week "daily strip" total of 65 episodes. (None of the episodes produced by DiC were included in the syndication package.)

On NBC Saturday mornings, the opening sequence originally contained clips from The Chipmunk Adventure with a new version of the theme song. After the first half of the season, a new opening was introduced featuring the Chipmunks coming out of a Mercedes, but with the same redone theme as before.

In the syndication package, the opening from Seasons 1-5 appears with the theme redone for Season 6.

This season was not included in the syndication package.

Main article: The Chipmunks Go to the Movies

The opening in the series shows The Chipmunks and The Chipettes spoofing various movies. These include: Indiana Jones, Frankenstein, Jaws, Star Trek V: The Final Frontier, Batman (1989 film), and Star Wars. The opening finally shows The Chipmunks and The Chipettes going to a movie premiere at the Grauman's Chinese Theater and the cinema starts with Alvin spoofing Leo the Lion, mascot of MGM Studios. This era was seen all throughout the 1990-1991 season on NBC Saturday mornings in the 10:30 AM timeslot. This season wasn't included in the syndication package either, though it was rerun on USA Network's USA Cartoon Express from 1994-1995.

Main article: ALVINNN!!! and The Chipmunks

All episodes are produced by Bagdasarian Productions and OuiDo! Productions, with the participation of M6. Though France's M6 was the first channel to premiere the series, UK's Nick Jr was the first English release with two episodes every Friday (currently Saturday).

The series began with two new 11-minute episodes airing in the US on Nickelodeon at 4:00pm EST every weekday with re-airings of the previous two episodes the following weekday at 2:00pm EST for the first two weeks of premieres, after which only one new episode aired every weekday. Towards the end of the second week of one new episode a weekday, the premiere time changed to 5:00pm EST. This trend continued for most of the second season, though with more breaks between groups of episodes.

Within the later seasons, Nickelodeon's airings became much more inconsistent. These seasons retained aspects of the original airing trend, such as airing new episodes every weekday or one episode pair a week, though the occurrences of these schedules and the premiere times changed constantly. Each grouping of episodes tended to be separated by weeks of no premieres or would be removed from the schedule unexpectedly. Most re-airings where removed from Nickelodeon and placed on Nicktoons.

For the UK episode listing and DVD availability, see List of Alvin and the Chipmunks episodes/UK.

Episodes in the season began with one new showing a day on weekdays before transitioning to two new episodes premiering at 11:00am EST on Saturday mornings. Episode numbers after Blabber Mouth to Summer Camp were pushed back one number/letter due to Nickelodeon pairing Blabber Mouth with Snake Charmer instead of Summer Camp.

Episode numbers from Theodore's Calling to Royal Pain were moved up one number/letter due to Nickelodeon skipping the premiere of Bloodline (originally paired with The Toy), likely the result of the episode's darker theme.