Jungle Rhythm is an episode of The Alvin Show series.

While out in the jungles of Africa to record animals sounds for their new record, they hear a new and mysterious sound. While trying to find the source of the sound, Dave discovers are being stalked by a native with what appears to be a deadly blow gun filled with poisoned darts. After they jump into a cauldron and hear "Witch Doctor" playing, they are relieved to hear that the native is not dangerous, but is a fan who wants to play his flute for them. 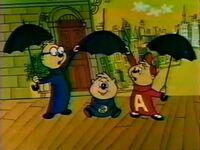 Dave and The Chipmunks are outside on a rainy night playing the usual unintended game of hide-and-seek before they go into a music hall. Inside it's discovered they are in the building and the music hall director asks if they would come down to the stage to perform. During their performance, Theodore has issues working his umbrella and keeps getting stuck inside it. As they tap dance, Alvin keeps stepping on Theodore's feet to the annoyance of Dave and Theodore. They conclude the song in the audience. 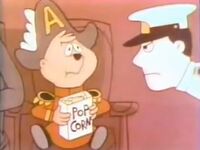 Dave and The Chipmunks are preparing for a live performance, but Alvin is missing and his brothers cannot remember where he went. They are forced to begin the show without him. Not long after, Dave spots Alvin in the audience and exits the boat to get him. Once in the boat again, Alvin disappears, with his brothers close behind, in some fog. The brothers continue singing as Dave frantically looks for them. He finally finds them in the audience. As they finish the song, Dave finds himself waking from a dream.

Clyde Crashcup and Leonardo invent a camel and a trek to Egypt. Later, they discover an evil Egyptian God who puts a spell on Clyde.