"Hushabye Mountain" is a ballad originally by the song-writing team Robert and Richard Sherman, featured twice in the film Chitty Chitty Bang Bang, that is covered by The Chipmunks and Dave Seville, first released as a single in 1968. The song is also included in the album The Chipmunks Go to the Movies. 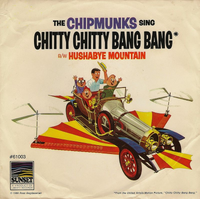 The Chipmunks:
A gentle breeze from Hushabye Mountain
Softly blows o'er lullaby bay
It fills the sails of boats that are waiting
Waiting to sail your worries away

Dave (The Chipmunks):
It isn't far to Hushabye Mountain (ooh)
And your boat waits down by the key
The winds of night so softly are sighing (ooh)
Soon they will fly your troubles to sea (ooh)

Retrieved from "https://alvin.fandom.com/wiki/Hushabye_Mountain?oldid=104599"
Community content is available under CC-BY-SA unless otherwise noted.