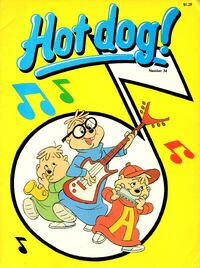 Hot Dog! was an American pop culture Scholastic magazine for kids with a focus on entertainment stories from movies, cartoons, toys, or kids stars as well as learning activities and games.

Host: If you watch the Chipmunks on Saturday mornings, you probably know this song. Alvin, Simon, and Theodore sing it at the beginning of their show.

The Alvin and the Chipmunks TV show is not the only place you will find the three brothers. The Chipmunks are everywhere! There are Chipmunk albums, books, toys, and TV specials — thanks to Ross Bagdasarian Junior and his wife, Janice Karman!

Ross told HOT DOG all about these singing superstars.

THE CHIPMUNKS ARE BORN!

Ross knows the real story of how the Chipmunks came to life. His father, Ross Senior, came up with the idea!

Ross Sr. has been playing with his brand new tape recorder. He slowed it down and he sped it up. He found he could make a very special sound. He took this new sound and used it for a funny song called "The Witch Doctor."

People everywhere loved Ross Sr.'s song. He tried to think of new characters to sing his crazy-sounding music. He thought of animals like elephants or reindeer. But these animals didn't seem right.

One day, Ross. Sr. was driving in his car. He turned into a driveway — and out jumped a little chipmunk! The chipmunk stopped and stared at the car. Ross Sr. could not believe it. This tiny chipmunk did not want to let his car pass by!

Ross Sr. loved the spunky little animal. It gave him the idea for Alvin. His new singing stars were going to be chipmunks!

The Chipmunks' first hit song was "Christmas Time is Here." It was a big hit. That was over 25 years ago. Since then, the Chipmunks have made 19 albums!

The Chipmunks were TV stars in the 1960s, too. Their show was called The Alvin Show.

When The Alvin Show went off TV, no one heard about the Chipmunks for many years. But Ross knew that his father had made up some very special characters. It was time to bring the Chipmunks back!

It was not easy.
Ross: No one wanted to hear about those old characters, the Chipmunks.
Jolie: A super album called Chipmunk Punk changed everything. Kids loved to hear the Chipmunks sing songs by Billy Joel, The Cars, and other popular groups. The Chipmunks were ready to return to TV!

Alvin and the Chipmunks is very different from the old Alvin Show. The new cartoon is fill of action. The Chipmunks go on crazy adventures to places like England and France. They even go to Japan. Everywhere the brothers go, Alvin get's them into big trouble!

The Chipmunks look different, too. The dress up in crazy outfits like tuxedos and punk rock clothes. On one show, Alvin dressed up like Michael Jackson and sang "Beat It." On another show, Alvin had to dress up as a ballerina to get away from someone who was chasing him!

When the brothers are not wearing costumes, they wear their long sweaters. They wore the very same ones in The Alvin Show!

NEW KIDS ON THE BLOCK

There are some new faces on Alvin and the Chipmunks. They are the Chipettes!

Janice came up with the idea for the Chipettes. When she was a little girl, she watched The Alvin Show on TV. She thought there should be girl chipmunks, too. Now Alvin, Simon, and Theodore have girlfriends!

This spring, the Chipmunks will star in a new TV special. In this story, the brothers leave Dave's house to look for their real chipmunk mother.

Last year, there was a half hour show called The Chipmunks Story on Saturday morning. It showed the Chipmunks as babies. It told how their mother has to leave them on Dave Seville's doorstep because there were not enough nuts to eat in the forest.

Dave was a poor songwriter then — but he took the Chipmunks in and brought them up like people! He helped them become singing stars.

Soon the Chipmunks will be movie stars, too! Their very first movie will come out next year.
Ross: It will be a real action adventure starring the Chipmunks and the Chipettes. It will take place around the world, and there will be lots of music!
Jolie: There is also lots of music in the Chipmunks' live show. The show travels all over the country.
Ross: It's a real rock and roll extravaganza!