Hillbilly Son is an episode of The Alvin Show series.

Chuck Wagon, one of Dave's cousins, comes to visit. After he states he can't do anything, Alvin makes it a point to teach him to do everything. The boys try to find something Chuck can do, but are unsuccessful. Disappointed in himself, Chuck begins to sing country tunes and play the guitar. Excited Chuck can do something, Dave and the boys help their cousin launch a recording career. When the news spreads, every hillbilly relative of Dave comes looking for his help in making them successful too.

Señor Alvin walks down the street hanging posters advertising his singing performance tonight at a Spanish café. While Alvin practices his singing voice, Simon expresses his annoyance. Dressed for the part, Alvin, his brothers, and Dave travel to the café. The band plays, and as Alvin attempts to sing, he is interrupted by the intensity of the band's music; all the while Theodore giggles. Following the song, Alvin tries to sing more but the conductor informs him the song is over and they argue as a result. 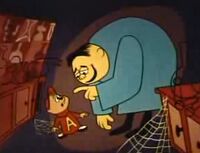 Alvin's walking down the street until he enters into a magic shop. Once inside, Sam Merlin, owner of the shop, reveals that he knows a good deal about Alvin's life. He then convinces Alvin to go with him into his inner sanctum of magic. Inside he shows Alvin various illusions. After Alvin sees the music of the song, he tries to escape. By the end of the song he is seen running out the store. 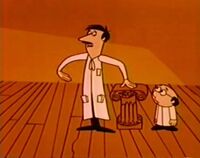 After creating a perfect bed, Clyde Crashcup invents a canopy bed. However, it takes him a long time to go to sleep.