Haunted House is an episode of The Alvin Show series.

Dave inherits the Chesley Estate and is excited to show the boys. Unknown to Dave, a ghost (JP Lester) is excited to have the opportunity to scare him in order to get the Ghost of the Year award. After the ghost's first failed attempt, Dave has Simon bring the things in from the car and Theodore starts painting while Alvin sets off looking for ghost tracks. The ghost fails three more times at scaring the boys. After failing yet again (mistaken for Alvin), the ghost sleeps with them. In the morning, they find out he is a ghost and take off running. When the ghost accidentally plays a record, he flies away in terror as well. 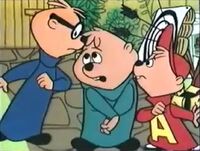 Dave is irritated since The Chipmunks' toys are all over the yard. Alvin complains about the amount of work involved, but Dave says it can be fun if they sing or even whistle while they work. They being to clean the yard: Simon and Theodore move the same toys back and forth while Alvin starts but falls asleep in his hammock. Seeing this, Dave threatens to ground them for a month. While he is gone they "clean" by sling-shooting their toys from a tree into the garage.

​Dave goes into Alvin's Barber Shoppe to get the "whole works." While the mustached boys sing, Theodore shines Dave's shoes, Simon gives a manicure, and Alvin shaves. Alvin keeps nagging Dave about whether he is Irish or not and tells him that being Irish helps enjoy the song. The people wish Alvin to cut Dave's hair so he does and shaves a "A" onto the back of Dave's head in the process.