Good Neighbor is an episode of The Alvin Show series.

The narrator introduces the Sevilles to the audience and informs us that neighbors are constantly moving out with one moving in only occasionally. While Dave is at the store, The Chipmunks meet the new neighbor, who does not like being disturbed as he sleeps. The neighbors are involved in multiple conflicts until Alvin blasts him into space to orbit the moon. 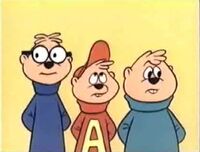 On a farm, Theodore looks for his dog but only finds other animals instead; Dave and his brothers then begin searching for the dog as they sing. While Dave is looking in the bushes, he spots a dog catcher sneaking behind the bushes with a net. The boys find his truck and determine that Theodore's dog hasn't yet been taken. As dusk approaches, Theodore calls for the little dog, who at this time has been caught. The dog catcher is sympathetic to them both and lets the dog go.

Dave and the boys go to Old MacDonald farm to learn about the farm animals and the sounds them make. Once there, they get into their farm costumes while Dave looks at materials he can use for hand drums, which he plays while The Chipmunks sing about various animals on the farm. Near the end of the segment, MacDonald comes out and is surprised to see all the animals in a conga line. 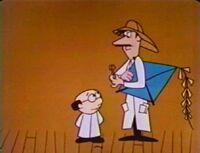 Needing light, Clyde has Leonardo light an oil lamp but is blown out when Leonardo opens the window to see the rain. When lightning strikes, Clyde develops the idea of the electric light by inventing electricity. Trying to harness lightning, they attempt to "catch" some lightning strikes in containers by various unsuccessful methods. Admitting failure, they head inside, turning on the light switch as they enter.

Retrieved from "https://alvin.fandom.com/wiki/Good_Neighbor?oldid=97277"
Community content is available under CC-BY-SA unless otherwise noted.