Good Manners is an episode of The Alvin Show series.

After The Chipmunks disrupt a visit with Mrs. Frumpington by breaking a window and acting sarcastically, Dave loses his temper. Mrs. Frumpington volunteers to teach the boys good manners. She attempts to instruct the boys on how to properly act at the table and how to treat visitors. The Chipmunks use the lessons to take advantage of Dave by buying over $100 worth of junk from a seller, R. B. Huston, and by making Dave buy them enough groceries to stay in their tree platform for a few days. 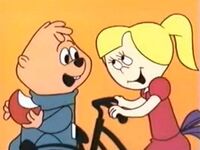 Theodore's sitting on a fire hydrant when Daisy Belle rides by. When he calls the bike a beauty, she rides away upset. Simon's putting together an erector set when he too compliments her bike. After she destroys his work, she rides into Alvin who first starts to argue but mentions her new bike instead. She leaves and cries claiming men care only about "earthly" things. David sees Daisy in tears, complements her, and states someday a man will go up to her and sing to her, which he does to cheer her up. While the three chipmunks sing to her, the boys each ride her bike until Dave makes them get off and he rides away with her. 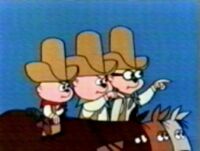 Dave and The Chipmunk gang drive into a western town where they are scheduled to make a picture. Dave crushes Alvin's request for a gun before allowing them to put their cowboy costumes on. Dave stands next to the director, who explains that they are filming a sing along TV short. The three chipmunks are directed to sing the first verse seated on a dancing horse that knows his part perfectly. Herbie gets everything else ready and rolls them. As they sing their song, they experience a couple rough rides on the horse. When Alvin has a disagreement with the horse, he retrieves a gun from the back room and shoots a few rounds, causing the horse to run away off set.

Retrieved from "https://alvin.fandom.com/wiki/Good_Manners?oldid=89536"
Community content is available under CC-BY-SA unless otherwise noted.