List of Episodes
Fancy is an episode of The Alvin Show series.

While vacationing at a beach resort named Surf, Sand & Sea View, Simon, Theodore, and Dave enjoy the scenery as Alvin watches TV, uninterested in the beach. When Alvin is accidentally hit with a beach-ball by the girl next door, he is taken by her so much that he literally floats. Dave and his brothers believe he is really sick when he takes a shower and skips lunch. When Alvin finds out she is on the beach he sets out to impress her with various maneuvers: back-flips, trampoline tricks, and surfing. After she realizes he is "Alvin the Chipmunk," her favorite singer, she immediately wants to give him a hug. Alvin runs back to watch TV when she wishs to kiss him. 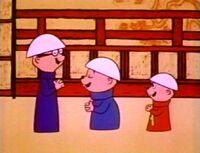 Dave and The Chipmunks visit a restaurant in Japan. While everyone else eats, Alvin tries over and over again to pick up his food with chop sticks with no luck. Dave tells the boys about the landscape outside, but Alvin is hungry for a banana. The boys place bowls on their heads and walk around the restaurant singing. Once they finish, Dave places a bowl on his head frustrated and they all leave. 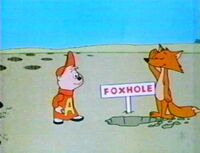 The Chipmunks are new recruits at Basic Training for the US Army so they march with their rifles until given other assignments. While Simon and Theodore complete the tasks, under the watchful eye of Master Sergeant Dave, and maneuver through the obstacle course assigned to them, Alvin performs them wrong or just avoids them. At the end, Alvin is seen sneaking out of the showers and heading for town. 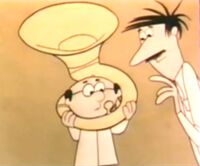 Seeking to break the sound of nothing, Clyde invents the trombone (which is really a tuba) and Leonardo attempts to play it without luck. After Clyde prefects the trombone (an actual trombone), he tries to play but also fails. Forgetting to invent music, Clyde does so. With the help of Leonardo, they create the musical notes. Excited, Clyde goes on to invent the orchestra (a single person playing seven instruments). Wanting to present music to the world, Clyde invents the jukebox.