List of Episodes
Eagle in Love is an episode of The Alvin Show series.

Stanley the Eagle finds a lost necklace and gives it to an eagle statue atop a clock tower. (Stanley thinks that the eagle statue is a female, and he wants to impress her.) Unfortunately for Stanley, the owner of the necklace reports her jewelry stolen and Stanley is being sought by the police. Alvin and his brothers find Stanley and take him to the cops. They drop the charges, but the cops force Dave to be responsible for Stanley. 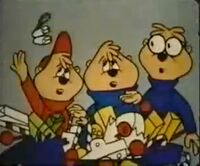 Dave and the boys are in the supermarket shopping. Alvin recognizes their record beginning played on the loud speaker. Dave starts singing lead while Alvin and his brothers sing in the shopping cart. During the song the boys attract an audience but irritates the store clerk who places Dave and The Chipmunks in paper bags before shoving the cart out the door. The segment ends with them arguing in the parking lot.

Dave introduces The Chipmunks to a live audience. The boys start playing an upbeat version of the song that eventually annoys Dave enough to stop Alvin from singing. Alvin tries to tell Dave the song needs to have some swing but confuses him instead. Simon explains saying the song should have a more contemporary feel. Dave rejects the idea and makes them sing the traditional version with him. Midway through the song they decide to go upbeat.