Eagle Music is an episode of The Alvin Show series.

Stanley the Eagle attempts to sing with other birds but is driven away. When The Chipmunks find him in his birdhouse, Simon tries to get Stanley to sing for him, but he is too upset. After Dave hears Stanley's failed effort, he tells the boys that eagles can't sing, they scream. Alvin solves the problem by having Stanley play music instead on a pair of cymbals. The boys join in and before long television crews arrive to cover the story.

Dave is planning to go out courting, but it snows (Alvin pulling a rope that drops snow). Back inside, Dave sits in his rocking chair next to the heater and cat and asks Alvin to play his harmonica and for Simon and Theodore to sing to cheer him up. The boys stop and Alvin informs Dave the snow's gone so he can go courting again. Snow's dropped on him again before he can leave. Soon after, Effy Lu comes up the mountain and is covered in snow. She returns to cover them in snow. 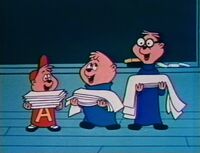 Theodore explains to their teacher that he and his brothers used no words in their school project. Instead The Chipmunks drew pictures to communicate their ideas and seek to present the project with song. They show scenes of the natural beauty, history, and people of America such as the purple mountains, relations with the Indians, and Abraham Lincoln and George Washington. When the boys are finished, pictures are scattered around the classroom.

Retrieved from "https://alvin.fandom.com/wiki/Eagle_Music?oldid=101680"
Community content is available under CC-BY-SA unless otherwise noted.