Dude Ranch is an episode of The Alvin Show series.

Dave and the boys head for a popular dude ranch out west for a vacation. Once they get to their hotel, they discover that Sam Valiant is the room clerk. Hearing that Dave is attempting to create a western song, Valiant keeps pestering Dave to use one of the songs he's written and replace The Chipmunks with himself by using various disguises. Unable to stand him any longer, they quickly pack up and leave. Valiant finally finds himself a partner out in the desert. 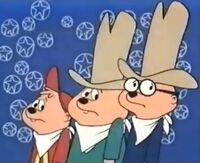 Dave and The Chipmunks are out camping and the boys want to go home (Simon's cold, Theodore's scared, and Alvin's hungry). When Dave says they are home, The Chipmunks start singing. While singing Alvin keeps saying "cantaloupe" instead of "antelope," at the annoyance of Dave. At the end of the song, the boys start walking away to find them some cantaloupe with a confused Dave in pursuit.

The segment begins with Dave finishing up some lyrics for The Chipmunks' next song. Meanwhile, Alvin is holding a speech to declare why he should be voted President. After a brief confrontation with Dave, the boys sing their new song with Alvin interrupting occasionally about his campaign. His supports grow until they are all chanting "We want Alvin!" by the end of the song.

Retrieved from "https://alvin.fandom.com/wiki/Dude_Ranch?oldid=82986"
Community content is available under CC-BY-SA unless otherwise noted.