Disc Jockey is an episode of The Alvin Show series.

Dave is out attempting to convince radio stations to play a new track but when he returns he informs the boys they don't want to air singing Chipmunks anymore. Alvin and his brothers set out to save their careers. When a disc jockey named King Malchun still refuses to play the song, "The Alvin Twist", Alvin is determined, sneaking it onto the radio. When Dave finds out, he rushes to the station. The song receives huge popularity. 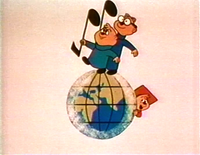 The Chipmunks are on large sheets of music playing with the notes (Theodore and Simon bowl, knocking Alvin over). Alvin proclaims that there is music everywhere. He places his ear up to a globe and clips are shown of other musical segments: Stuck in Arabia, August Dear, Japanese Banana, and Spain. 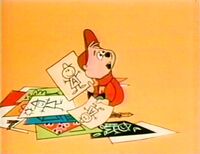 Alvin is busy performing a "special kind of doodling" when Dave and his brothers ask what he is doing. As Alvin sings, he uses his doodling to help tell a story. His brothers love the idea so they ask Alvin to do it again with them too. Within Alvin's drawing world, Alvin goes south to Louisiana. On the way he encounters Sally, a guy he mistakes for a horse, a grasshopper, and a chicken. 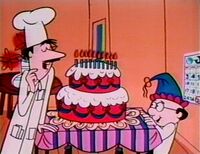 Clyde feels that it is imperative to invent the birthday party, being that is is Leonardo's 40th birthday. After many different birthday related inventions, including Pin the Tail on The Donkey, a birthday party hat, and a bicycle (Leonardo's gift that Clyde himself rides and eventually destroys), Clyde decides to give Leonardo birthday spankings, a common birthday tradition. During doing so, Leonardo's mother shows up, and it is brought to Clyde's attention that is actually his birthday, not Leonardo's. The segment ends with Leonardo's mother then spanking Clyde.