Alvin & His Pals In Merry Christmas

Clyde notices an empty mantelpiece and decides to add an interesting invention to it - the ship in a bottle. Once he finishes drawing, he admires the realism of the wind and the waves. Unfortunately, the waves are too realistic for him and he experiences seasickness.

Clyde reveals news of disturbing noises at night to Leonardo, almost as if someone is trying to break into the house. In order to protect their home, Clyde creates man's best friend, which he names Rover. Clyde pats Rover before realizing he patted the wrong end; to prevent confusion, he draws on the tail. His master informs the watchdog of his duty, but Rover is unable to find the door for too much shag covers his eyes, which Leonardo removes. Rover passes a mirror and is instantly affectionate towards it. Losing his patience, Clyde adds a nose to his dog to stop this behavior prior to carrying him to the door. Rover turns on him and chases his owner from the house before he sits back in front of the mirror. 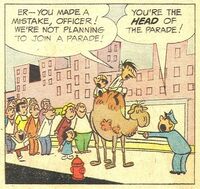 Unsatisfied with the expense of operating a car, Clyde sets out to invent something that uses much less fuel - the camel. Clyde and Leonardo enjoy a bumpy ride, great for exercise, on the two humps until an officer stops them for being the head of a parade (really a curious crowd). The men take their ride to a playground so the beast can play in the sand though the sand pile is full of children. After the camel eats a woman's hat, they are chased to a beach where Clyde begins constructing a sandcastle. Meanwhile, his camel walks away and steps on a man lying on the sand. The man confronts the inventor, kicking sand in his face, before leaving with the girl Clyde was eyeing. Given the trouble the camel has given him, Clyde donates it to the zoo. 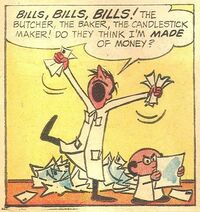 Feeling out of touch with others due to being stuck in the laboratory all the time, Clyde decides to invent the communications system. To start with, the United States Mail and the mail slot is created. An avalanche of mail covers him as he waits, but he learns that it's full of solicitations and bills. Unhappy with the letters, Clyde invents the telegram and his first is a singing message. Clyde listens for twenty minutes to the man's terrible voice and diction before pushing him out the door and creating the telephone. The two calls he does receive are from people that want his money, leading him to destroy the new invention. His last form of communication is the television though he quickly axes that idea for the communication he sees is not good. 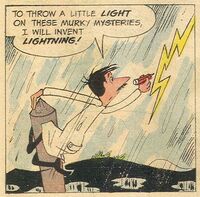 Clyde asks Leonardo to inform him of the general atmospheric conditions though when he states it's the same as usual, Clyde is sick of it. The inventor sets out to invent weather in order to add variety for each occasion. Since they are in the middle of winter, snow is invented. Having produced enough snow, Clyde erases the snowfall only to discover he forgot the frostiness to keep the snow from turning into slush. To solve the problem, Clyde creates a fiery sun. The sun is so intense it parches the crops and people so rain is invented next. To provide light, he draws in some lightning before realizing he needs to tame it too with a lightning rod. The men pick up the extra rods after the storm but find themselves running to avoid electrocution. Back home, the variable weather sickens them. 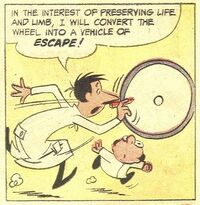 Seeing a workman straining with a bucket of paint, Cycle decides to make the job of lifting the bucket to the top of a building easier by inventing the wheel and the pulley. After securing the bucket, the man pulls it to the top but the pulley detaches from the building, covering the man in paint. The man chases them which urges Clyde to turn the wheel into a vehicle for escape - the bicycle. They get away and find themselves speeding downhill before crashing into a tree. Recovering, Clyde realizes he omitted the brake. Near their crash site they find an amusement park with an unamused owner. In order to attract business, Clyde creates the Ferris Wheel. The men test it out and find themselves stuck at the top due to mechanical failure, the owner leaving, and Clyde dropping his pencil.

Clyde throws his boomerang towards a pile of useless inventions, but to his surprise it returns to him. He throws it harder though it still returns, frustrating the inventor. He finally succeeds in getting rid of the boomerang by walking to the pile and digging a hole to bury it.

Ship in a Bottle