Clyde tries on a hat given to him by Leonardo, but it's too big so he throws it away to buy another. On the way to the store, a burglar sees him invent money, resulting in a club to the head. Incidentally, the bump on the head allows the original hat to fit perfectly.

Clyde expresses his displeasure of having to walk downstairs for milk so he invents the cow right in his room. His assistant recommends adding a bell and after she bites a hole in the rear of his trousers, he adds one. Ready for a glass of milk, he calls the cow, named Gertrude, and regrets the idea when she begins wrecking the room. He tries controlling her causing Gertrude to sit on Leonardo. Hearing the racket, the landlord learns there's a cow in the room and orders the inventor to get rid of it. Leonardo whispers an idea and they take the cow to the country for a picnic. There Crashcup asks the cow for two glasses of milk, but his short assistant informs him he needs to milk the cow. Now holding two glasses of milk, a bull charges them, throwing them over the fence and they leave Gertrude behind. 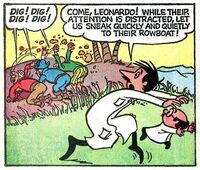 Finding the amount of noise distracting in his laboratory, Clyde invents a place where people can get away from it all - the deserted island. Once the peaceful island is created, the inventor considers what type of people would be best for the new piece of land, and as he does, a boat of pirates row closer. Frightful and short of pencil, Clyde invents a treasure chest, which he leaves poking out of the sand, before rushing to hide. The pirates locate the chest. While they uncover it, Clyde and Leonardo steal their rowboat just before the group learns the chest contains no treasure. 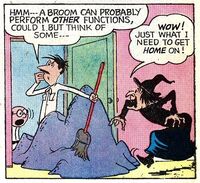 Clyde introduces Leonardo to coal, his newest invention. As the result of his shoveling, coal dust fills his hair leading to his next breakthrough, the brush. Upon removing all the dust from his hair, he dashes to the bathtub for the dust now covers his face and resides under his clothes. In the tub he invents a modified brush, the long-handled bath brush, for the center of his back. Once dry and clothed, he proceeds to create other brush modifications as the dust moves from his clothes, his shoes, and the furniture before resting on the floor. To get rid of the collected dust, Clyde brooms it into the street where a witch steals his last creation, leaving the dust everywhere once more. 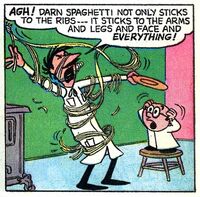 Fed up with another lunch of sandwiches, the Great Inventor creates a cooking device known as the stove. A man delivers groceries and Clyde begins whipping up a platter of spaghetti. As he dishes out the pasta, it sticks to every surface of his body. To combat the problem, the apron is born. For his next dish he attempts to flip pancakes only for them to stick to the ceiling prior to landing on his head. The culinary hat is his solution to further protect himself though a pinch of a lobster leads to the invent of the suit of armor. Following near suffocation making pizza and an explosion making crepes, the two men settle on the safety of sandwiches. 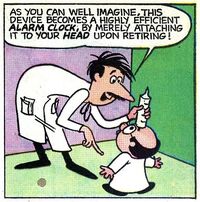 In order to solve the problem of Leonardo oversleeping, as well as similar time keeping issues, Clyde creates the clock. His first rendition consists of a candle alarm clock attached to his assistant's head while the second is an hourglass, which breaks after Clyde kicks the idea around. The sundial comes next, complete with its own disadvantages, leading to the principle of machinery. The grandfather clock is born though one must count every tick in order to know the time. Unable to keep track of the tick count due to interruptions, Leonardo suggest adding a face. Clyde opens the door to summon the neighbors to marvel at the invention, but a mouse runs up the clock, swiftly followed by a cat and dog. A dogcatcher arrives taking the clock, and the ticking, with him leaving Clyde to invent a nursery rhythm.

Invents the Art of Cooking

Invents the Clock
Retrieved from "https://alvin.fandom.com/wiki/Clyde_Crashcup_Dell_Comic_1?oldid=97556"
Community content is available under CC-BY-SA unless otherwise noted.