Alvin and the Chipmunks Wiki
Register
Don't have an account?
Sign In
Advertisement
in: Episodes, ALVINNN!!! and The Chipmunks: Season 1

List of Episodes
Clowning Around is an episode of the ALVINNN!!! and The Chipmunks series.

Theodore is desperate to land the part of the monster in the school play, so Alvin decides to show Theodore how to really scare people. But Alvin scares him so badly, that poor Theodore freezes like a statue. Can Alvin and Simon unfreeze Theodore before the big audition?[3]

Dave and Simon allow Theodore to believe he scared them, but Alvin refuses to do the same, wrecking Theo's confidence before he's set to audition for the monster in the upcoming school play. Alvin decides to teach him how to scare by using Theodore as the example only to freeze him in fear when Alvin scares him dressed as a clown. At dinner, they explain to Dave that Theodore's trance is the result of a study on the Himalayan Monks and cannot talk or eat. After Alvin gives him a bath and tries to go to bed, Theodore won't keep the lights off. The next morning, Simon and Alvin try to snap Theodore out of his petrified state by taking him to "Awesometown." When that fails, they try launching him around until he lands in a truck and they have to retrieve him. Still in a daze, they take him to the auditions where he is given the role after just staring at the casting panel. On the way home, Theodore hears a clown and attacks, unfreezing himself. He offers to apologize but the clown is terrified and runs away. 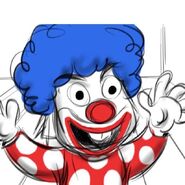