Cinderella? Cinderella! is an episode of the Alvin and the Chipmunks series. 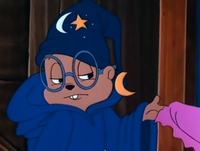 Miss Miller asks The Chipettes to do a few chores around the house. Brittany refuses only to learn that she must mop if she wishes to go to a dance that night. Upset by the news, she falls asleep while mopping.

While asleep she dreams she is Cinderella, forced to do the will of her wicked stepsisters and stepmother. A Palace Messenger arrives inviting them to Prince Alvin's ball, but Cinderella must finish her chores to go. She completes them in time only to be told she can't go. Simon Seville Fairy Godmunk appears offering to help her get to the ball by turning her old rags into a beautiful dress, a blueberry into a carriage, Cinderella's cat into horse, and his assistant into a coachman. Prince Alvin begins the ball with a musical performance followed by the dance. Cinderella finally gets her chance to dance with the prince only to have to rush out at the stroke of midnight, losing her slipper in the process. The Palace Messenger is sent out to find the maiden of the slipper. He finds Cinderella, but her stepmother refuses to let her get married.

She awakens to find Miss Miller mopping half the floor for her. Miss Miller allows Brittany to go to the dance if she mops the other half of the floor and gives her a green dress.