Camping Trip is an episode of The Alvin Show series.

When Dave and the boys go to a national park for their camping trip, they accidentally camp under a waterfall, convincing Dave it's raining. They move the tent (which happens to be over a geyser). When it erupts, Dave blames Alvin. Later, when a bear takes Alvin's cap, Dave thinks the bear ate Alvin (who's out digging gold) and runs to the police. The man tells Dave there's a bandit out in the woods, quickening Dave's resolve to find Alvin. Alvin and the bear find the loot and capture the bandit. Afterward, the park ranger takes Dave away since he thinks Dave's crazy. 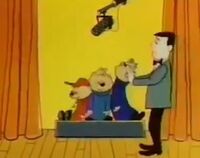 It's morning at the Seville House and Dave, eager to begin the day, attempts to wake the boys, but they won't get up. After much poking and prodding from Dave, the brothers finally make it still mostly asleep to the breakfast table. Unable to wake them enough to walk, Dave pushes them to the cab and into the television studio. They wake up in time to sing though fall back to sleep between verses. By the end of the song, the boys are fully awake and Dave is passed out snoring in his studio chair.

The Chipmunks are in their room reading books about horses. Alvin spots an ad for a horse for sale and the boys empty their piggy banks with the intent of buying it. The boys get out their lucky charms and begin singing after Dave asks them why they have them out. Dave shakes his head and indicates they should go to bed. They pray they get a horse and they play with an imaginary horse made from a shooting star.

Retrieved from "https://alvin.fandom.com/wiki/Camping_Trip?oldid=90960"
Community content is available under CC-BY-SA unless otherwise noted.