Alvin and the Chipmunks in Concert!

May the Best Chipmunk Win

The Chipmunks Camp Out

The Chipmunks have planned this special concert just for you. As their guest, you get to choose who will sing. Just push a button and listen to Alvin, Simon and Theodore or all three of The Chipmunks sing at once! You also get to play picture games, answer riddles, and lots more!

Dave and The Chipmunks are stuck in traffic on their way to a concert when they could use some help through traffic and around road blocks so they don't arrive late. At the theater, the boys rush to change only for Dave to see them in different costumes seconds before the curtain rises; they each have a different style of music they wish to perform the concert in. Following the intro, various styles of the second song are available to be chosen by the reader. The conductor, frustrated by the number of styles mashed into one song, quits leaving the brothers with only an orchestra. After teaching the reader about instruments in order to conduct the next song, the band itself loudly walks out. Dave criticizes their organization of the concert, but The Chipmunks handle the situation by playing their own music, with the assistance of the reader. During the intermission, two riddles challenge the reader about instruments.

Their guest performers still haven't arrived, news the boys hide from Dave, so they improvise to get through the next song by dressing up in French costumes, with the help of the reader, and faking a French accent. Dave isn't fooled by the deception though Alvin counters by claiming everyone likes rock 'n roll. Suddenly a spaceship crashes into the concert hall and three aliens from Mars emerge. The aliens are given a chance to explain their presence though Alvin has a good idea already. The Chipmunks' real guest performers, The Chipettes, arrive shortly after to discover the power's out because of the crash landing. While Dave checks the generator, Alvin instructs the reader to help the girls navigate through the dark to the stage. The Chipettes start their guest number and the reader is given the option of how it's finished. The Chipmunks thank the audience and finish the concert with "We're the Chipmunks."

There are 18 different opportunities to interact with the story or music, some of which can be changed during the song for a different sound or new singers.

The book was illustrated by Rick Detorie. 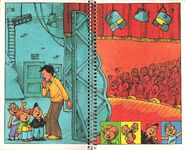 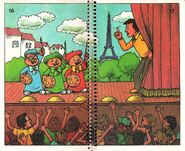 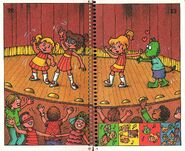