This article is about the toys associated with the 1961 series. For other uses, see Alvin and the Chipmunks (disambiguation).

The musical Alvin and the Chipmunks are plush toys made by Gemmy Industries in 1998. There is a plush of each chipmunk (Alvin, Simon, and Theodore). When you squeeze one of the chipmunks, it plays a small segment of "The Chipmunk Song (Christmas Don't Be Late)."

Gemmy Industries also made an animated Dancing Alvin plush in 1998 as well. There are two versions of it. One version plays "The Chipmunk Song" and the other version plays "Wooly Bully."

Theodore (Inches: 6)
Add a photo to this gallery 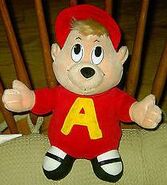 Alvin (Inches: 12)
Add a photo to this gallery
Retrieved from "https://alvin.fandom.com/wiki/Alvin_and_the_Chipmunks_(Gemmy_Plush_Dolls)?oldid=84583"
Community content is available under CC-BY-SA unless otherwise noted.