Alvin and the Chipmunks Wiki
Register
Don't have an account?
Sign In
Advertisement
in: Movies, ITunes, Blu-ray
English

Alvin and the Chipettes in Cinderella, Cinderella

Christmas With The Chipmunks

The film stars Zachary Levi, David Cross, and Jason Lee, with the voices of Justin Long, Matthew Gray Gubler, Jesse McCartney (as The Chipmunks), Christina Applegate, Anna Faris, and Amy Poehler (as The Chipettes). It was originally scheduled to have premiered on March 19, 2010, but was moved to a Christmas 2009 release instead and later to a December 23, 2009 release in the United States.

The film has received unfavorable reviews from movie critics / websites, such as Rotten Tomatoes, but has proved to be a huge financial success, making over $215 million to date in North America alone and over $440 million to date in total worldwide receipts, while being made on a budget of just $75 million.

During Alvin, Simon, and Theodore's "Save the Music" benefit concert, Dave tells Alvin to take it easy and that the concert "is not all about you", but Alvin has a difficult time listening. He then jumps on top of a scaffolding and causes an Alvin billboard to fall. He warns Dave to look out, but it sends Dave flying across the stage, yelling "ALVIN!", into some electric devices.

After the accident, he is rushed to the hospital. He survives and must stay for a few days to recover. The nurse gives him a sedative that will make him fall asleep in a minute, so he tells his boys that he's leaving his Aunt Jackie in charge of The Chipmunks until he returns. Also, he tells Alvin, Simon, Theodore that he's made arrangements for them to go to school. When Dave goes to sleep, a woman comes to escort the Chipmunks home, but Alvin doesn't want to leave Dave, so he runs amok. He messes with the hospital bed, causing Dave to go up and down, Theodore to crash into a trash can, and Simon to fall in the sink, but a doctor injects sedative into Alvin's butt and he sings "Daydream Believer" until he is fast asleep. The doctor tells the woman that, for her sake, Alvin is asleep for the entire flight. Simon suggests he inject Alvin again just in case.

The Chipmunks land at the airport, where they meet up with Aunt Jackie, who introduces her grandson Toby, a former high school dropout. He is playing on a Nintendo DS, paying no attention to them. Toby then accidentally knocks Jackie's wheelchair down some stairs while getting the boys' luggage, and an airport luggage trolley crashes into her. She is also sent to the hospital, so Toby is left in charge.

Back at the house, they have fun eating Cheese Balls (Alvin also sings a slightly different version of "Stayin' Alive") and spinning in a kitchen appliance, singing "You Spin Me Right Round (Like A Record)," but they end up in a hooked pan holder. Dave calls them and Alvin and Simon answer, but when Theodore joins them, he causes a pan to fall and Dave wants to what is going on. Simon warns Alvin not to stress him out, so Alvin lies that Jackie is making them a five course meal; however, when Dave finds out he cannot speak to her, he becomes suspicious, so Alvin can do nothing but hang up, making Dave yell "ALVIN!" and his stress monitor to beep wildly.

When attending West Eastman High School on their first day, the boys are soon bullied by Ryan Edwards and his athletic friends due to their fame and high status, which attracted all of the girls. Though Alvin remained a tough target by giving Ryan and his best friend Xander a wedgie, Simon received a swirlie while Theodore is taunted about his weight until his two brothers attacked them and landed themselves in the principal's office. The boys have fun being looked after by Toby mainly because he is basically a big kid himself. Theodore tries to bond with Toby, but he is always either ignoring him or being short towards him.

Meanwhile, Ian now lives in the basement of Jett Records. But, a FedEx mail comes to the building and a package falls out. And, three singing female chipmunks, The Chipettes, Brittany, Jeanette, and Eleanor come out of it and want to be famous like The Chipmunks. So they sing "Put Your Records On" to make Ian adopt them. He does, telling them that The Chipmunks ran away from him and left him broken-hearted, to make the girls not trust them. He lets The Chipettes stay in "his" model suite, an apartment room he persuades Brittany to break into and unlock.

Meanwhile, The Chipmunks enter the school concert to win $25,000 and save the school's music program after realizing the principal was a fan. After Alvin displays some athletic prowess in dodgeball, he starts hanging out with the jocks of the school and slowly becoming distant with his brothers. This leads to random blowouts between Alvin and Simon, but the one who is most affected is Theodore who believes he is losing his brothers with them fighting all the time. The Chipmunks meet The Chipettes and fall in love. The Chipettes sing "Hot N Cold" to get Dr. Rubin, the school principal, to enter them in the contest. The Chipmunks and The Chipettes compete against each other in a Battle of the Bands. Alvin warns Brittany about what Ian did to him and his brothers, but she doesn't believe Alvin. Alvin, though reluctantly, allows Simon to be humiliated in front of everyone when one of the jocks tricks him into thinking he's now the school Litter Moniter and he ends up being thrown into the dumpster.

At the concert, The Chipettes win after Simon and Theodore forfeit the competition because Alvin failed to show up (he hung out with the football team instead). Eager to get rich, Ian videotapes the girls performance and posts it on YouTube, along with his phone number. Finally, Alvin shows up only to see that everyone's gone. A disappointed Brittany calls Alvin selfish and stated that she never wanted to win the way Ian was making her. When Alvin returns home, Simon and Theodore pretend they're sleeping and ignore him, forcing him to live with his guilt and failure to live up to his promises. The embarrassment is too much for Theodore to take who runs away to the zoo. When Toby and the boys find and save him from an eagle, it brings out the best in all of them and the two chipmunks forgive Alvin and go back to "One for all, and three for one". (As Theodore put it.)

Soon, The Chipettes are hired as the opening act at a Britney Spears concert at the Staples Center. Since the concert is on the same night as the school concert, Ian decides to blow off the battle and get the girls to perform at the concert. When Brittany notices that Ian plans to only make Brittany a star, she rebels by saying she won't do it without her sisters. Unwilling to let anything get in his way, Ian grabs them by their tails and threatens to barbecue them if they didn't do what he said.

At the school, Alvin gets a phone call from Brittany, saying that she and her sisters have been locked in a cage and that she admits that he was right all along about Ian's sinister nature. Alvin races to save them on his red motorbike while Simon tells Jeanette how to open the cage on the phone. The Chipettes escape from the cage, climb out of the limo, and they jump onto Alvin's motorbike. (The Chipmunks' cousin, Digger, from Fox's NASCAR broadcasts, makes a cameo during the chase.) Ian pursues them with an R.C. helicopter, but they leap off the motorbike and grab onto the helicopter. Jeanette than snatches the remote and steers the helicopter away from Ian, while the motorbike drives straight into Ian's groin. Simon and Theodore are about to forfeit the concert again, but Toby stalls everyone by singing a short song to his love interest, Julie. Then, Alvin and the girls fly into the hall on the helicopter and they all sing "We Are Family," winning the contest and the $25,000. Dave then comes back and watches them perform, along with Toby.

Meanwhile, Ian dresses up as Brittany, performing in the center alone while people boo him and he is dragged off-stage.

As the credits roll, the screen shows photos of The Chipmunks and The Chipettes at the beach, at Christmas, in the kitchen, and in the garden. An epilogue shows Ryan and his gang of Jocks being forced to scrape gum off of the gym's bleachers as punishment for the way they treated the chipmunks (and for making Alvin miss the battle) and Ian being thrown into a dumpster backstage by the guards.

There was a lawsuit involved for half of the films profits filed by Ross Bagdasarian, Jr. and Janice Karman. Fox countered in a statement that the claims were "completely without merit. We look forward to resolving our differences and, in the meantime, we are continuing to move forward with this franchise." All claims were ruled in favor of Fox.

The sneak peek is shown only once on Nickelodeon. The preview shows the time they hide in the toilet tank and Toby tells them they have to go to school, saying what could go wrong on the second day of school. Dodgeball day is also shown. Simon and Theodore are hit, but Alvin manages to catch the ball. 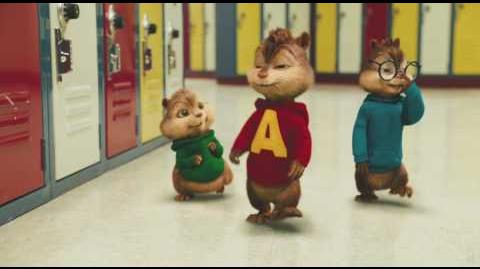 Alvin and The Chipmunks The Squeakquel Trailer 1 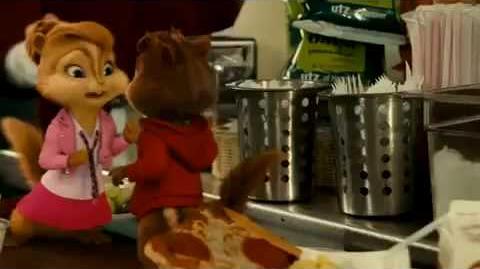 Alvin And The Chipmunks 2 The Squeakquel Trailer 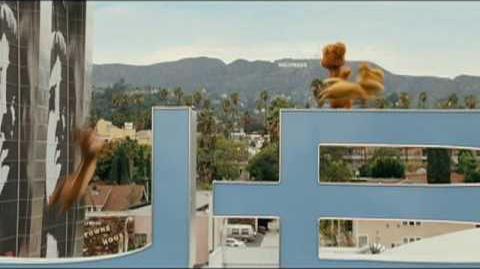 Alvin And The Chipmunks The Squeakquel "Making a Scene" Featurette