Alvin and the Chipmunks: The Ocean Blues

The Chipmunks attempt to sneak out of the house when Dave yells to Alvin and reminds the boys that they must practice for two hours before going to the beach. They convince their father-figure to let them practice on the beach, and as soon as time is up, they jump into the water: Simon reads while his brothers dive for shells. On his raft, Simon moves too fast and falls off. Unable to swim, an octopus named Octavius saves him. Alvin and Theodore notice he's missing, though when they spot him with the octopus on the beach, they rush to save him. Unfortunately Alvin's already hit the creature on the head with a saxophone before Simon had the chance to explain. Simon introduces them and Octavius is shocked and surprises them by holding an instrument in each hand. The octopus plays "The Stars and Strips Forever" and the boys want him to meet Dave and practice with them. For the next week, Octavius practices on the beach while The Chipmunks play. On the seventh day Dave comes to see the practice only to find the octopus. The group practices together, as Dave records, and continues to practice and play together each day.

The book was illustrated by Phil de Lara. 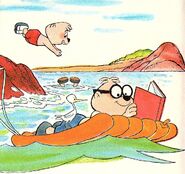 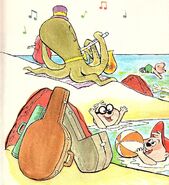 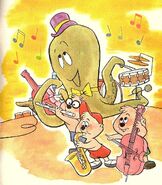