Alvin & His Pals In Merry Christmas

Alvin Dell Comic 6 is the sixth comic issue in the 28 comic Alvin 1962-1973 Dell Comics series and was originally sold for 12 cents.

Dave shows off his cowboy outfit to The Chipmunks before revealing they're going on a vacation to a dude ranch. Once they arrive, Dave tells them to be on their best behavior before the brothers go out to explore the corral. They attempt to ride a calf, to the ranch hand and Dave's dismay. The following day a rodeo takes place. Alvin spots some sunglasses on the ground and when he picks them up he burns the backside of a bull causing it to kick a man off. The boys go sit in a cart playing make believe when it starts moving and they become an unplanned rodeo clown act. Dave's angry though is calmed down with the idea of a barbecue after the introduction of the ranch owner's son Chester. Once the boys are full, they climb into a covered wagon for a nap. Chester notices and whips a horse to make the wagon take off and get the boys in trouble. The horses break free, and as they approach rocks, they quickly roll out of the wagon wrapped in a blanket. The farm hand learns Chester was to blame and drags him off while Dave decides they should go back home. Alvin tells Dave about a rumor they heard about digging to China and when they ask to try, Dave agrees. The boys dig, later showing Dave the deep hole and tunnel leading to Chinatown.

Alvin in "Do-It Yourself Dave" - 5 pages 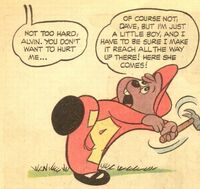 Dave receives an estimate of $200 to fix their roof; shocked by the high cost, Dave decides to buy $50 of equipment in order to tackle the project himself. The boys ask to help, but Dave only allows them to hold the ladder. Seeing as he forgot his hammer, Dave asks Alvin to throw it up to him. Alvin nails Dave straight on the chin, knocking him over before tumbling down the ladder. Dave is then restricted to a chair by the doctor. Seeing as the job needs to get done, the boys climb onto the roof under Dave's supervision. Dave decides to take a nap inside and has The Chipmunks tie themselves to the chimney with a rope so they don't fall off. The trio play around by swinging around the chimney, making too much noise for Dave. Dave returns just as the boys and chimney fall on top of him.

The Grass is Always Greener
Community content is available under CC-BY-SA unless otherwise noted.
Advertisement