Alvin Dell Comic 5 is the fifth comic issue in the 28 comic Alvin 1962-1973 Dell Comics series and was originally sold for 12 cents.

Dave brings home a tricycle, which immediately causes the brothers to fight over who it belongs to. Dave informs them that the bike is for them to share equally. Following an hour of no arguing, Dave looks outside to discover the bike in pieces and each of The Chipmunks playing with a tire.

Dave heads to bed early only to be woken by a dripping faucet. He attempts to fix it but breaks the faucet instead. The Chipmunks check on him before they are ordered to the basement to shut the water off. On the way Alvin slips on a skate causing him to fall into the pipes, breaking them too. Simon fixes them though when Dave calls a plumber, water sprays out of the phone. Dave runs into the night to find a plumber, informing the boys not to touch anything; Alvin doesn't listen and floods Dave and the plumber when they return. Alvin shows Dave the problem and they check into a hotel. 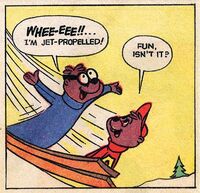 Dave and the boys are at a ski lodge; Dave is participating in a ski meet while the brothers have to break up a barrel and stay out of trouble. Alvin sees skis from the planks of the barrel so he and Simon use them to ride down the mountain as Theodore tends to the cabin fire. The duo flies down the slope, right past Dave who begins to follow them. The brothers barely miss a stump, but Dave isn't so lucky. He flies through the air, over the boys, until he lands upside down with skis providing a bridge over a ravine for the runaway pair of chipmunks to cross. They enter a cave, picking up a bear, before they loose it and Simon crashes into a tree. Alvin continues speeding down the mountain, as Dave nears the finish line, landing just in front of his father-figure. The boys return to the cabin with a trophy to find Dave sitting by the fire fueled by skis. 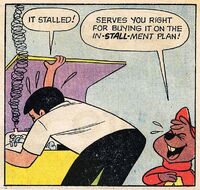 Dave shows The Chipmunks a new collector car - a 1926 Sputtz Bare-back. Alvin believes the car is a wreck, and once it stalls out, Alvin helps push it off the road and over a cliff. Miraculously, the car lands without a scratch and starts up. Dave follows a dirt road until he encounters a construction area about to have an explosion. The car stalled out again and they quickly hid. After the blast, a large boulder lands in the back seat. Rain starts falling as they drive away. Lightning strikes the boulder and Dave sells the gravel remains. 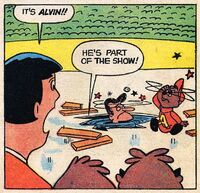 Dave and the boys get ready to see an ice show, but Alvin fakes laryngitis for he's lost his ticket. Really wanting to see the show, the red-clad chipmunk pretends he has an ice delivery in order to fool a guard. The guard suspects Alvin's deception though Alvin alludes him by jumping into a barrel. Unfortunately for him the barrel is needed for the next stunt, and as Alvin attempts to roll away, he ruins the stunt and is discovered by Dave and his brothers, who believe he's part of the show. Alvin runs from an angry Freddy Twinkletoes and the guard before being swept into the next event, much to the audience's approval. After crashing into a wall, Alvin confesses to the guard and promise to avoid ice shows. The next day, a studio worker suggest ice for Alvin's eye, causing Alvin to sit on a ceiling swing as he refuses to record.

Little Angela in "No Space for Rant" - 4 pages 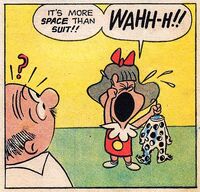 Little Angela's father attempts to sleep but is woken by a howl. Her mother suggest she go outside to play spaceman so her daddy can rest. When she opens the closet, the space suit is full of holes. Her mother informs her husband that he needs to buy a new suit, only for him to state that space suits are for boys and not girls. Angela disagrees for she's seen a bunch of women wearing space helmets. Wanting proof, her dad is dragged to a beauty salon. Fed up, her dad buys her a complete space suit though it's too tight for her to move around.

Unlike other dogs, Fido was an unhappy little dog for he wanted to fly so he spent all his time with birds. Despite the teasing from the birds, he was determined to fly, even trying by waving his front paws up and down. One day he ran to the tree the birds hung out at only to find a sleeping cat and a trapped baby sparrow. In order to save the bird, Fido frightened the cat up the tree and parted the branches for the small bird. The next morning the birds returned, excited that Fido saved their friend's life. They commended him for being a dog for a dog can frighten cats. The realization made Fido happy, despite not being able to fly.

Water on the Brain

No Space for Rant
Retrieved from "https://alvin.fandom.com/wiki/Alvin_Dell_Comic_5?oldid=97580"
Community content is available under CC-BY-SA unless otherwise noted.